A day in the life of an online newsroom: Jess Brady

When Jess Brady stepped into her first real newsroom, she was overwhelmed.

She’d completed an undergraduate degree in english and political science and a master’s in journalism, both from Western University, and landed her first job as a reporter at a Corus station in Cornwall, Ont.

“You can do whatever program you sign-up for, but it never really completely prepares you for when … you sit down at your first desk at your first job and you hit the ground running,” she said.

Five years later, Brady, 28, now sits in the AM980 newsroom – a London news-talk radio station. She’s having one of her slower news days, but she’s learned a lot since Cornwall. She knows a slow day could change into the most important day at any second. 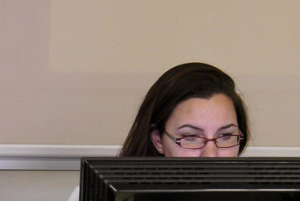 She has short brown hair and glasses, and her voice is what one would expect of a radio host. She’s articulate, clear and engaging, the type of person who makes you feel comfortable.

“I’m pretty open, I really love to talk to people and to learn about them and to ask them questions, so it’s kind of a good career that I’ve found for myself!”

She’s known around the office for her bubbly, contagious laugh, and her positive personality.

“Jess is a person who lights up any room she is in,” said Jennifer Bishop, a part-time anchor at AM980. “She is so vivacious and truly enjoys her work day in and day out.”

Travis Dolynny, another co-worker as well as reporter and talk show producer at the station, said she’s always bouncing around story ideas and bringing the team closer.

“Jess is outgoing, thoughtful and inclusive,” he said. “She will go out of her way to help people, and shows caring and compassion with those she interacts with.”

Brady works as a reporter for the station and also anchors for a half hour three days a week. In addition, she now finds herself writing sometimes six to seven stories per day for AM980’s website.

Although she loves reporting for radio, she understands written components add value to the station’s reporting.

“The web is really your chance to expand upon the story, give all of those details that you’d love to give on-air, but sometimes you can’t fit it all in on one story,” she said.

“It was just starting to ramp up,” she said. “The importance of web reporting has really grown over the last five years, hugely so I think.”

Two experiences stand out in her mind when she thinks of the power of an online newsroom.

The first is Joe Fontana’s trial last year. For those that don’t know, Fontana was London’s previous mayor who was convicted of breach of trust, fraud and uttering forged documents.

Throughout her coverage of the trial, she received a lot of attention from Londoners looking online for the newest information.

“That was certainly a big one just because of the importance of what was going on in that court room, and how the ripple effect was on the public and the impact it had on people who were watching it very, very closely,” Brady said.

The second story was her coverage of a crash at a Costco in London. A 65-year-old woman allegedly drove into the entrance of the store, resulting in the deaths of a 6-year-old girl and a newborn baby.

Brady said the city became invested in learning about the family and how they could help. Thousands of Londoners showed up to a vigil held a short time later, which she live-tweeted to the community, sending pictures and updates.

“It was very, very moving to see that and to bring what was happening, that information, from the park to people who couldn’t be there,” she said.

Social media also allows for a two-way relationship with her audience.

She remembers being at an announcement last year. Someone in the community brought up a question she hadn’t thought of through Twitter.

“The whole goal is to ask questions so you get information that people need and want,” she said. “You can engage with a lot more people and know how they feel and what they think about the product that you’re putting out there.”

AM980 also has a Facebook account they update constantly, engaging with different demographics and reaching a broader audience.

Brady makes sure she’s also reaching out, checking different news outlets and finding new angles. She follows about 900 people and news organizations on Twitter, with about 1,100 followers of her own. She seeks out different perspectives online to broaden her understanding.

“Perhaps the angle of the news organization isn’t exactly your style,” she said. “Be open to things because that’s how you learn and that’s how you see all kinds of different stories. If you limit yourself to only one other source that’s not very good and that’s not what journalism should be about.”

For now, Brady continues to keep up with the face-paced online world as best she can. A day in her life is never the same, but there are some essentials: keep updated, be ready for anything and make sure to squeeze in the occasional glance at BuzzFeed for some entertainment.

It’s a job that’s always changing, but it’s something she knows she was meant to do.

A Day in the Life