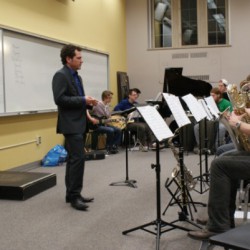 If a pin dropped right now, you’d hear it.

But tonight, the silence hangs heavy with anticipation, and soon the room will erupt into a flutter of melody.

The Worst Pop Band Ever, a Toronto jazz band, is at centre stage. They’re performing for Western’s jazz ensemble during one of the student band’s twice-weekly practices. 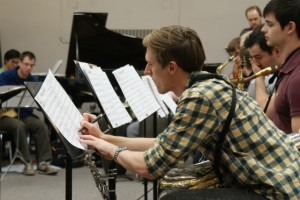 “Being able to sit that close to musicians of that calibre and watch them play, watch them interact, watch their technique, watch their level of communication with each other, and just their overall musicianship — I think that alone is very inspiring for our students,” said Kevin Watson, assistant professor in the Faculty of Music, who conducts the ensemble.

The jazz ensemble is comprised of 30 students who were selected after a round of auditions. During a regular two-hour practice, they play each song in their performance repertoire in preparation for shows organized throughout the year. Their next concert is at the Wolf Performance Hall at the London Public Library’s Central branch on Thursday, March 21.

The visiting band continues to entertain the students with their original, upbeat tunes. Each song they perform triggers the audience to bob their heads to the melody and tap their feet to the beat. After playing their last song, the band pauses to take questions from the students who ask about improvisation and how best to improve their sound and technique.

As the clock nears 8:30 p.m., the spotlight turns to Western’s jazz ensemble.

Watson stands before the ensemble, ready to conduct. He raises his arms and instantly, the trumpeters and percussionists stand at attention. The trombone and saxophone players bring their instruments to their lips.

Thirty pairs of eager eyes focus on Watson, and 30 breaths of air are taken at once. On Watson’s downbeat, music fills the room.

It’s nearly 8:40 p.m. when the ensemble finishes playing for their Toronto guests. The Worst Pop Band Ever ends the evening by performing another original song. But this time they invite two students — trumpet player Marsh Bindseil and saxophonist Benjamin Davidson on stage to jam with them.

The end of their piece is met with applause. 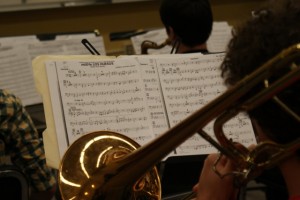 Musicians follow along with the music during practice.
Photo by Mekhala Gunaratne

“It was a great experience. They were a very energetic band and they got our whole band really worked up and excited about improv. So it was a lot of fun,” Davidson said.

A little after 9 p.m., the students disassemble their instruments and carefully pack them into their sturdy black cases. Watson stands at the front of the room as a queue of students forms to ask him questions.

“My favourite part is just watching the students progress. Our students have made tremendous improvements since September and it’s really exciting to hear our students, especially in their improvised solos, demonstrate an ability they didn’t have before,” said Watson. “They’ve jumped to a new level in their playing. That’s the most exciting part for me.”

“We’re just excited to be furthering the jazz tradition. I guess some people are of the opinion that jazz is dying or that it’s not big around town, but I think that if people come to hear these talented young musicians they’ll understand that jazz is pretty healthy.”