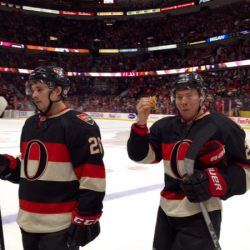 Sens goalie Andrew Hammond skates off with a burger after a recent victory.
Photo courtesy of the Ottawa Senators.

If you’re at a hockey game and plan on throwing something on the ice, you better make sure your team is winning.

That was best exemplified Thursday night.

This is the second game in a row where a Hammond victory has triggered a quarter-pounder to be launched from the stands, much to the delight of Sen’s centreman Curtis Lazar, who picked up last night’s burger and took a bite following the win.

The act was lauded by players and newspapers alike, and the storyline of hucking ‘burgs on the ice is generally positive.

But what about the losing teams?

Maple Leaf and Oiler fans protested their teams’ lack of success in recent years by throwing jerseys on to the ice – again and again and again. Most fans were ejected and chewed out by members of the media and the team.

It’s something that’s frustrated one jersey-tosser. Ryan, who asked to have his last name withheld for this story, threw a Leaf jersey early on in a contest, and was escorted out by an usher.

“I was just showing my disgust with the team,” said Ryan, a lifelong Leaf fan. “Then I got the boot. Maybe if I had thrown some pom-poms on to the ice congratulating the team for losing fifty in a row, it would’ve been a different story.”

Maple Leaf players were not happy with the jerseys being thrown by fans.  Video courtesy of YouTube.

Ryan threw the jersey after play had stopped, so he wasn’t interfering with the game or endangering the players in any way. He feels there’s a bias towards “positive” objects being launched on the ice.

“You’ve got guys throwing dead animals and food on to the ice, and they’re heroes,” said Ryan. “They don’t get kicked out because their message was ‘positive.’ How do they even know that?”

Hockey has an extensive history of bleacher projectiles, mostly positive. The Detroit Red Wings have a 50-year-old tradition of throwing octopi onto the ice before games. A Nashville Predator fan, in response to the octopi, tossed a catfish onto the surface before a 2010 playoff matchup between the Preds and Wings. The San Jose Sharks’ fans followed suit in that same playoff year, throwing a shark head onto the ice. All positive. All fans stayed for the rest of the game.

The Florida Panthers’ faithful throw rats onto the ice for every playoff victory, known as the “rat-trick.” Panther management encouraged the behaviour before games by selling rats at souvenir stands around the arena.

One of the original “rat-tricks.” Video courtesy of YouTube.

That name, of course, comes from one of the longest and most recognizable traditions in hockey: the “hat-trick,” where fans are encouraged to throw hats onto the ice if a player scores three goals in a game.

So where does the line get drawn?

The rulebook doesn’t state what defines a special occasion. Special is not necessarily positive, according to most definitions, just unusual. The Leaf’s recent ineptitude is historic, said Ryan, and he feels the occasion was special.

Maybe it’s dependent on the object itself – at least that’s how Edward Fraser, managing editor of The Hockey News feels.

“The jersey is sacred in sports,” said Fraser. “It’s the incarnation of fandom, so when that’s thrown away, it represents tossing away your allegiance to a team. It’s no surprise that gets a negative response from the players.”

But when Leaf fans threw waffles onto the ice in 2010, one fan was ejected and charged with mischief.   So maybe if it’s a food-related item, it has to be a meat product?

Ryan, meanwhile, will be watching Leaf games at home, where he can throw anything he wants.