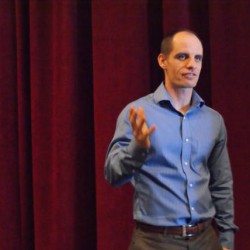 Paperless textbooks and virtual classrooms — the digital era of education is in full swing and it’s stirring a revolution in how students learn.

“The reality is we live in a wonderful time,” says cultural anthropologist Michael Wesch. “There are at least three billion people connecting and collaborating in the air all around us, and you and I both have devices on us that can reach out into that.”

And reaching out is exactly what Wesch has done.

The arrival of this digital era prompted the associate professor at Kansas State University, who was the keynote speaker at Western University’s Technology in Education symposium earlier this month, to critically re-examine traditional models of education.

“One of the reasons why education is faltering right now is because of loss of meaning and significance,” he said.

The result is this — students are asking the wrong questions, Wesch said.

How much is this assignment worth? What material will be on the exam? How many pages should this essay be?

“These are terrible questions,” he said.

But they’re the most common questions among students who are placed in the position where strategic or surface learning — emphasis on getting the highest marks — awards the most merit.

Students, however, aren’t to blame.

“The way [instructors] use PowerPoint is typically to list their key points and the students dutifully write down the key points and memorize them. This facilitates surface learning or strategic learning.”

Maria Drangova, a Robarts Research Institute scientist at Western, who attended the symposium, has encountered several of these strategic learners.

“We see so many students coming through who are only there to get the grades rather than actually learn, so I find it a little bit depressing,” she said. “They’re just bred to be strategic learners so they can’t let themselves go and learn for the sake of learning. It’s like the whole system has failed in teaching them how to learn and be curious and inventive.”

“I think most people think of learning as acquiring information and that’s a perception that people hold for their entire lives sometimes. Learning is ultimately the growth of the entire person and that includes developing not just skills but capacities for courage, curiosity and wonder.”

But just how can students develop courage, curiosity and wonder?

They can start by asking “why.” said Wesch. Students who are excited by something go from “being a strategic learner to being a deep learner.”

“In deep learning you’re operating under a ‘why?’ — you have a reason for why you want to learn what you want to learn. The outcome of that is that you’re able to sit with really complex questions and love it. Whereas if you are a strategic learner, hard questions surprise you because they just keep you from getting that A.”

Not only do students need to ask different questions, they also need to fail — many, many times.

“If we want kids to embrace their vulnerability, we need to create a space where they have freedom to fail. We learn naturally through failure,” said Wesch, who acknowledged that creating that kind of atmosphere is difficult.

“I think failing is the best way to learn,” he said. “When you can’t do something and then you find out how you really can do it, you learn that in a better way than if it just went into your cognition and you just believe what your professors say.”

So, where does the technological revolution step in?

Reading and writing isn’t enough, Wesch said later in an interview. Students need to be digitally literate too.

“We really need to create very rich experiences around projects and problems that students really care about. Incite their passion, get them really excited about something and then the technology can be harnessed and leveraged to support that passion.”

But if students don’t have that passion, said Wesch, technology is “the world’s largest distraction device.”