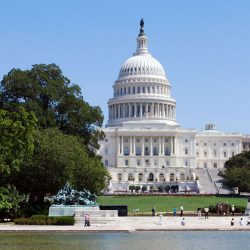 By Sameer Chhabra on December 6, 2016 in Capstone Projects, Politics

Not wanting to limit himself to learning an individual set of skills, Jesse Jeffery chose Western’s MMJC because of its dual-approach to media. The MMJC allowed Jesse to pursue his love of journalism and writing, while also providing him with the communications skills required to succeed in an increasingly digital world.

For his capstone project, Jesse transformed his love of politics into a website that breaks down the intricate minutiae of American federal politics. The current political climate in the United States played an influential part in his digital decision. In spite of the undeniable difficulties associated with running a government — and those associated with building a website — Jesse produced American Politics 101 and satisfied his hunger for the political scene. As the next saga in U.S. politics unfolds, those interested in the upcoming election can go to American Politics 101 to learn more about the entire governmental process.

Capstone Projects are produced by MMJC students at the very end of the program, as a chance to demonstrate their new skills and explore ideas and themes that interest them. You can learn more about the MMJC program at the FIMS website: fims.uwo.ca/mmjc

I am currently an MMJC student studying at Western University.
View all posts by Sameer Chhabra →