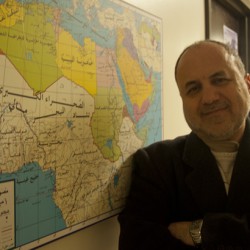 The lights go down in the quiet screening room in the basement of the University College building at Western University. The room is empty except for Sam Khalil, a friend of hers, and a curious journalism student.

“We just grabbed the movie yesterday and there wasn’t enough time to advertise for the movie,” Khalil said. “Maybe next time we’ll be more organized. I might arrange it myself and choose the movie.”

The series previously only featured movies in Italian, German, Russian and Spanish. Two Arabic films were added this year, one for each term.

“In German or Italian language, the students watch more than five to eight movies every year,” said Arabic Professor Yahya Kharrat. “For Arabic, this is the first time. We’ll watch two movies but next year we’re going to increase them slowly but surely.”

The Arabic film series was Kharrat’s idea. He’s says there’s growing interest in Arabic cinema, even though the films can be hard to find.

“It’s not easy,” he said “Usually when we decide that a movie is good for our students, if it is not from Canada, we order it from the States.”

The first film was screened on Feb. 13. It was a 2002 movie from Palestine called Rana’s Wedding. Kharrat said he chose the film because the dialogue is easy to understand.

It’s the story of a young Palestinian woman who is told by her father one morning that she must marry before 4 p.m. or else move with him to Egypt.

Rana spends the rest of the day rushing through Jerusalem to prepare for her wedding. Although the plot may not seem too compelling, watching it unfold in the context of the Palestinian-Israeli conflict is.

The film’s Arabic name is Jerusalem, Another Day, suggesting that the filmmaker wanted to showcase the issues Arab Jerusalemites may face on a daily basis.

The Arabic film industry started to take off after the colonial powers in North Africa and the Middle East returned to Europe. The imperial governments built the studios and labs needed to produce films and newsreels, so after independence the infrastructure was already in place for domestic filmmakers. They also benefitted from foreign studios shooting in their countries.

“Some of the technical facilities and some of the visiting productions were from France and as far as Hollywood,” said Peter Limbrick, associate professor of film and digital media at the University of California at Santa Cruz.

“Even though those films were not films that were necessarily from the Arab world, or at least they weren’t providing any Arab perspective, nonetheless some of those encounters became training grounds for later Arab filmmakers.”

Limbrick said that the 1960s and ’70s were a time of growth for Arab cinema, but there were still problems with distribution. Although Arab movies were regularly featured on the film festival circuit in the Arab region and in Europe, these filmmakers had trouble getting exposure in North America. Limbrick said that changed after Sept. 11, 2001.

“I think along with the kind of xenophobia and hatred and misinformation that circulated after that there was another side, which was an increased interest in the Arab world,” he said on the phone from his home in San Francisco. “People I think are exploring a little bit more to try to find representations of these countries and understand the area a little bit more.”

Limbrick said the proliferation of DVDs makes these films more available, while festivals and art houses bring their audiences the more interesting movies.

“They’re really, really important and most of them run on shoestrings,” he said. “But they’re doing incredible things to get a more diverse representation of Arab cinema than just the things that might show up at the Oscars every few years.”

This year the Palestinian documentary 5 Broken Cameras was nominated for an Academy Award in the Best Documentary – Feature category, but did not win. Limbrick said this kind of exposure does little to increase distribution.

Back at University College, as the movie ends and the credits roll in Arabic, Khalil gets up from her seat to switch the lights back on. She turns to look at the vacant theatre. She says that although Kharrat originally conceived the film series as a supplement for the Arabic for Beginners Course, the moviegoing public should pay more attention to Arab cinema.

“Our movies reflect our culture,” she said. “There are lots of movies, action, drama, movies based on true stories. I encourage people to watch Arabian movies.”