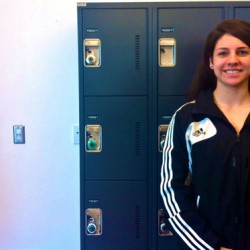 By Kelcey Wright on April 8, 2014 in Transitions

It wasn’t until the last buzzer went that she realized how much she loved the game.

Angela Tilk’s long and successful career in the Canadian Interuniversity Sport league was over.

“It feels like just yesterday I stepped on that old blue and gold court at Kerr Hall (the former home court for the Ryerson Rams basketball team),” says Tilk. “But, wow, that was six years ago? I still kind of can’t believe how fast that went.”

But, with the end of one journey, comes the beginning of another.

“I needed a change,” says Tilk. “I needed to get out and do something different and take my mind off of basketball.”

And that’s exactly what Tilk plans to do.

On May 1, she will ditch the jersey and pick up a new type of uniform.

Tilk will be in red and white, working at the political and public affairs department at the High Commission of Canada in Singapore as part of a school internship program.

“It’s crazy how quickly things can all change,” says Tilk.

And lots of change has been Tilk’s experience since 2008, when she joined the CIS as part of the Ryerson Rams women’s varsity basketball team.

She was a league all-star in her first year, and her success as a Ram would only grow more impressive throughout her career there. 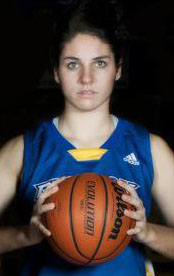 Angela Tilk is a three time all-star, twice with Ryerson and once with Ottawa.
Photo courtesy of Angela Tilk

Tilk made two Ontario University Athletics Second All-star teams, until a torn Achilles would put an abrupt halt to her athletic career.

“It was devastating,” says Tilk, who needed surgery just days after the initial rupture to her Achilles tendon. “I thought everything was over. It was my fifth year, I was graduating and basketball was really all I knew.”

But that injury didn’t stop her.

“Ange is one of the hardest working people I have ever met,” said Charles Kissi, Tilk’s basketball coach at Ryerson for three of her five years. “She’s a true leader and that kid doesn’t give up.”

After taking a year off of athletics because of the injury while helping coach the team she played for earlier that year, Tilk decided to make the switch to the University of Ottawa to finish her career in the OUA.

“I thought it was the right decision for me academically and athletically,” says Tilk, who graduated with a bachelor of economics from Ryerson in 2013. “As a varsity athlete, I didn’t know how to be a student and not a student-athlete. I knew I had to continue my athletics.”

She was accepted into the master’s of public and international affairs program at the UO and earned a starting position on the women’s varsity basketball team.

And with a season record of 14 wins and eight losses, Tilk’s team ended the regular season in third place in the OUA East division.

Tilk and the rest of her Gee-Gee team moved to the quarter-finals where they beat the York Lions by 24 points. 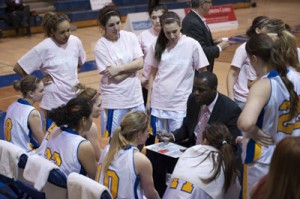 Angela Tilk (second from the left, standing) listens to Charles Kissi talk to his team during a time-out at Ryerson University.
Photo courtesy of Angela Tilk

However, her career came to another abrupt halt which felt too similar to her; the Gee-Gees lost their semi-final game to their cross-town rivals, the Carleton Ravens. And Tilk’s basketball career, something she’d been devoted to every day for the last decade, was over.

“I literally practised or played or trained six days out of the week for more than six years,” says Tilk. “Then when it was over, it was almost unbelievable – and not in a good way.”

And after six years in the league, moving her life to the other side of the world for more change was just what Tilk felt she needed.

Tilk’s master’s program offers every student a chance to participate in a summer internship between their first and second years.

“I applied to a bunch of different internships all over Canada and just this one in a different country,” says Tilk. “When they called me back for this one, I was so shocked and so happy. I was so excited, I immediately started planning.”

Tilk’s internship is a 90-working-day contract, which means she will be free to travel Southeast Asia as of August 7.

Tilk has one more year of schooling in Ottawa to complete her master’s program, but doesn’t have any concrete plans of what next year may bring.

“I might take a year off, I might not,” she says. “I’m not really sure about anything as of yet, but that’s what makes the future kind of fun and exciting.”