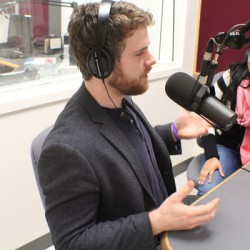 We are audio journalists; we craft stories using voice and sounds.  But this time we added photographs .  The result?  Audio slideshows, a creative,evocative means of enhancing oral stories with simple images.

Battling breast cancer is not just a physical challenge, but a mental one. For women in London fighting the illness, there is a safe haven – Bosom Buddies; a meeting ground for those whose lives have been affected by breast cancer. Through group meetings and physical therapy, Bosom Buddies makes coping with breast cancer a little easier.

Kerone McWhinney has more on the story.

Tanya Olsen is fighting a battle that most women shy away from. When she found out she had breast cancer, instead of buying wigs and hiding in private, she shaved her head. And even though the chemo-therapy made her weak, she still went rock-climbing. Tanya decided that staying strong was a better approach to fighting her battle.

The Canadian Breast Cancer Foundation says one in twenty-nine Canadian women diagnosed with the disease will die, but Tanya didn’t let this obstacle get in the way of living her life.  She decided she’s not only going to win her battle, but the war against breast cancer, through her creativity…

There is no honour in violence.

This is the driving force behind London’s Reclaim Honour team.  As part of London’s Muslim Resource Centre, Reclaim Honour is a group of young Muslim women dedicated to learning about honour based violence and how it can be prevented.  Their project aims to delink the term “honour” from violence so young Muslim girls may no longer be victimized in the name of honour.

Sam Burgess has more about their mission.

Imagine paying thousands of dollars to put a pinball machine in your basement.The pinball arcades of yesteryear are closed. So the most devoted aficionados of the game paid big bucks to keep playing on their own. Now they’ve decided to share. A group of Londoners have created the London Pinball league and invited others to join them. Space is limited but the demand is not.

Maryellen Young thrives in a busy environment. The 34-year-old works as a frontline support worker at the Unity Project, which is often overcrowded. But she deals with the daily topsy-turviness in the emergency house because the residents living at the house become “like a family to her.” Cortney Cook has more.

Are you a pet owner that struggles to pay the vet bills? An animal clinic has opened in London to help owners on social assistance and those with low income. The East Village Animal Hospital is a high volume spay and neuter clinic that opened at the end of January.

Reporter Sarah Rohoman has more on the story.

All he needed was a little help.

In a matter of three months, Tank the cat went from living on the streets, to a shelter, and then, finally, a comfy home. Tank is the first graduate of Change for Change, a new adoption program for homeless and rescued animals. Launched by St. Thomas City Animal Services, the plan is to turn Tank’s success into just one story among hundreds.

Sri Lanka and speed skating are two terms that aren’t typically associated with each other. But Aloka Wijessoria isn’t your typical speed skater.

Wijesooira discovered speed skating after her family moved from the balmy beaches of Sri Lanka to the barren tundra of Nunavut several years ago. Now she shares her passion by coaching kids at London’s Speed Skating Club.

As Carl Hnatyshyn reports, speed skaters with backgrounds such as Aloka’s are becoming a more common sight in Canadian rinks.

In some cases, they’re even abusive to young children.  But the parents of minor hockey players are finally being dealt with.  In London, hockey officials have taken major steps to stop parental misconduct at their kids’ games.  Youth hockey was always meant to be fun, but as Gareth Bush reports, parents have become a serious problem at the rink. 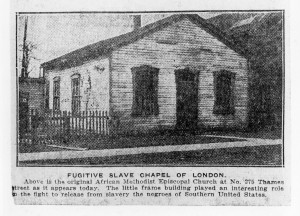 This is the original chapel at 275 Thames Street

There is a house, just south of downtown London that has more history than meets the eye. Today it’s an abandoned shack, falling apart from the inside out.  But more than one hundred years ago it was a stop on the Underground Railroad. If not for a few Londoners, it would have been turned into a parking lot last year… Jackie Chatterpaul has more on the story.
Saving London’s Slave Chapel by Jackie Chatterpaul

View all posts by The Editors →