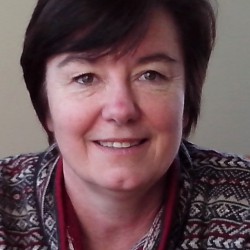 During that time, Joni Baechler has become one London’s most prominent city officials.  In the 14 years she has spent representing Ward 5 on city council, Baechler has established a reputation as an outspoken defender of the environment and sustainable development or, as she calls it, “smart growth.”

But Baechler announced in January that she will not be running for re-election this fall, nor for mayor as many citizens were pushing for.  She says she feels burnt-out after spending the past four years on a divisive and scandal-laden council.

With her agenda clear of responsibilities after October 27, the 54-year-old can finally complete the project that remains unfinished after eight years. Joni Baechler has sketched out this draft of her family tree project.
Photo courtesy of Joni Baechler

She has spent parts of that time devoted to painstakingly researching, organizing and sketching out a family tree.  But this isn’t just any family tree; it’s a tree that traces the lineage of her family back 1,000 years to the days of William the Conqueror.

Following the death of her parents, Baechler came across documents that show the family’s ancestry linking to a mistress of the famous Norman King.  Baechler hopes her time off in the fall will give her the opportunity to complete and paint a final version of the project.

“You really don’t have the time to get into it – there’s always a meeting or something to go to,” she said.  “It took me forever to map it out, to branch it out and see where it all fits.”

Baechler and her family have even gone as far as to travel to France three summers ago to track down their relatives who lived on a homestead in Alsace-Lorraine.

Baechler is proud of what she has accomplished so far and hopes to visit other distant branches of her family.

“I love the visual of standing there and saying, ‘that’s really cool.’ ”

Baechler is looking forward to having more time to pursue artistic endeavours after she steps aside from city politics.  She has always loved painting with water colours and plans to get back into it once her tenure as a city councillor is over.

As it stands, the family tree piece is an ambitious post-politics project, with hundreds of names spanning across 1,000 years and several countries including, France, England and Germany.

But will it fill the void left by the absence of a political career?

At the Starbucks across from the Masonville Mall in London, an older woman with silver hair approaches Baechler with a smile to say “hi” and check in.

“You made the newspaper again,” she says, referencing a recent dust up between Baechler and Mayor Joe Fontana.

“I’m always in trouble,” says Baechler laughing.  “I told you that.”

The veteran councillor uses the Starbucks as a makeshift office in Ward 5.  Two men across the café wave to Baechler.  She walks over and exchanges some quick pleasantries.

These are the people she represents, and these are people who look to her for leadership.  Baechler wonders who will stand up for them when she steps out of the political limelight.

“I feel like I’m letting them down – really good people,” she says.  “I’ve been around long enough that I really do know how to move the bar for my constituents.”

Despite this lingering desire to help her constituents, Baechler says she is at her wit’s end and feels like she has exhausted herself.

“Often they say your best strength is often your worst encumbrance,” she says.  “I think for me my best strength is I’m a go-getter, an overachiever – I can’t just do something halfway.  While that is a strength, at the end of the process you really wear yourself down.”

“I think after 14 years she can only do so much,” he said.  “After being in politics for a lot of years, you can kind of see a wearing on someone.”

Kim thinks part of the problem is that Joni hasn’t been able to accomplish as much as in earlier terms.

“She (isn’t) making the same difference as she was when she started out,” he said.

According to Joni’s friend and former city controller, Gina Barber, Joni has been thinking about stepping down prior to the 2010 municipal election. But because she felt she had made significant gains on financial accountability and transparency in land use development issues, she decided to run again.

“You need more than one term in order to make sure those are cemented…in place,” said Barber, who served on the planning committee alongside Baechler between 2006 and 2010.

The difference between the previous council and the current one is the level of preparedness and open-mindedness, says Barber.

“There was always the prospect of the progressive voice being heard,” she says. “You could by standing up, by talking, by doing your research and by doing your homework. You could convince others of the value of your decision.

One look at Baechler’s twitter account — @JoniBaechler – during a council meeting and it’s clear who she thinks hasn’t done their homework.

“It is the council that (has) tried my patience the most,” said Joni.  “I think with this group maybe it has frustrated me more because of the council’s conduct, the level of preparedness for meetings and the level of paying attention to the debate and discussion.”

She has also found the current council to be highly divisive, making it difficult to forge deals in the face of strong factional tensions.

“It is a hyper-political council, more so than I’ve seen before,” she says. “There’s a strong lack of leadership, because that’s the mayor’s job – to pull people together and unite council as best you can.”

Instead, Joni says the administration has been plagued by suspect dealings like  closed-door meetings and Fontana is set to face a trial in May on accusations of fraud.  Fontana was not available for comment in time for the deadline of this story.

“Council is supposed to be a repository of public trust,” she says.

In response, Joni tried—unsuccessfully—to have Fontana step aside until the criminal charges against him were resolved.

Adding to Joni’s frustration, Barber believes that she was “being locked out of any positions of influence.”

“She knows more about planning than people in the planning department and yet she was kept off from having a chair position (on the planning committee),” said Barber.

Even after dealing with these personal hardships at city council, the decision to step away from politics was shared with the entire Baechler clan.   When she first decided to get involved with politics she was inspired by her son Jacob, then nine, who told her to stand up and protect a woodlot that she had played in as a child.

And when it was time to decide if she was going to run for re-election in 2014, she consulted with her husband and her three university-age sons.  Last Christmas, Joni spoke to Jacob, now 22, who had been away on a co-op at EA Sports Vancouver, who gave her the final OK. She had already spoken to her husband and her two other sons, who also approved.

“I don’t think you can run for an election without (the support of your family),” she said.

Joni has since had offers to run provincially and federally, but she says she doesn’t “have an interest.” After 14 years on London city council, Joni Baechler hopes to use her free time painting water colours like this.
Photo courtesy of Joni Baechler

“I have had lots of offers for a variety of different things, and I’ve said I’ve got to really think about what I want to do.  I’ve got to take some time.

“I just know if I was to try to go to another layer of government…you’re married to politics and I love my husband and my family and I’ve been away from them enough so that’s just not in the cards for me.”

Kim thinks that once Joni steps down, she may find it difficult to follow politics from the sidelines.

“I imagine what she will find more frustrating than ever is watching the commotion from the outside and not being able to do anything about it necessarily,” he said.

“Who knows? After two or four years, maybe she will step back into it.”

Print class 2014: In transition
From gluten-free to distraction-free