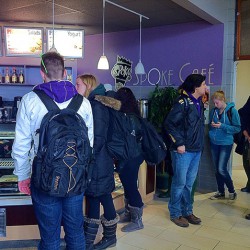 It’s 10:30 a.m. on a Friday and the Spoke Café is filled with the smell of toasted bagels as students line up for a mid-morning snack.

Located on the main level of the UCC, the Spoke Café is a popular spot for students, faculty and staff alike, due in part to their famous bagels.

“Our bagels are fantastic; we have our specialty cream cheeses that people just love,” said Anita Klaassen, 26, who works at the café.

Klaassen said it’s not unusual for the lineup to stretch past the Spoke’s doors.

The café sells a staggering 850 bagels a day, which they get from the Great Canadian Bagel chain, she said. The most popular bagels are jalapeno cheddar and spinach mushroom. The Spoke bagel even has its own hash tag on Twitter.

A lot of daily preparation contributes to the café’s success. Fruit for the café’s smoothies has to be prepped every day, and Klaassen said there’s always an extra person working to make sure the café is fully stocked.

Just before 11 a.m., only two hours since opening, the bagels have to be restocked and a staff member rolls out a cart piled high with bags full of them.

On this particular day, it’s clear that the café operates smoothly. Each staff member has a clear job—whether it’s taking orders, running the cash register or preparing food and drinks.

“The peak periods require staff to be focused and demand a high level of communication,” said Ben Lollar, the Spoke’s manager. “The workspace is set up to operate fast and efficiently, so when everyone is doing their part it is very smooth.”

As the lineup starts to get longer throughout the morning, the staff members remain calm and relaxed but orders are filled quickly and efficiently.

Customers come in and place their order with one staff member. Some know what they want without having to look at the menu, while others pause and consider their options. They pay at the register and the person taking the order gives it to the people on the other end of the counter, who set to work right away.

The bagels are sliced in half, placed on the toasting rack and come out nicely toasted on the other side.

Then two other staff members at the end of the counter put butter or cream cheese or any other desired toppings on the bagels, cut them in half again, and hand them to the waiting customers. “We have pretty quick service for the volume of people we deal with,” Klaassen said. “There’s usually a three-to-four minute wait time.”The Spoke Café was built in 2004 when the UCC was renovated, Lollar said.  The café’s space increased after undergoing renovations at the end of 2011 and beginning of 2012, he said.

Now, the Spoke Café has more than 40 part-time staff who work short, three-to-five hour shifts, with four to seven employees working at once. And all of the staff are students.

“Our student employment program is set up as a way to create jobs for students in this community and provide a convenient, accommodating work environment for those students.

“Students serving students,” Lollar said. “We wouldn’t want it any other way.”

Klaassen said the busiest times of day are from 9:30 a.m. to around 2 p.m., and it picks up again for the dinner rush at 4:30 or 5 p.m. Wednesday is the busiest day, while Mondays and Fridays are a little bit slower, she said.

Klaassen added that in recent weeks with exams coming up and more students spending time in the library and on campus, more people have been coming in on weekends.

“It’s picking up a little bit and it’s just going to get busier until the end of the year,” she said.

But she said it’s a fun place to work.

“Even when it’s busy, we generally have a pretty positive attitude and just enjoy dealing with students.”