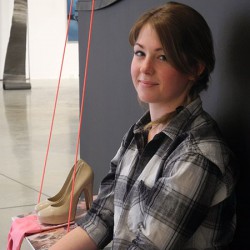 For someone who has spent four years elbow-deep in acrylic paint and other artistic media, the last thing you’d expect her to say is that she doesn’t want to be an artist.

Well, sort of doesn’t want to.

“I want to be a curator,” said Mackenzie Sinclair, a 21-year-old fine arts student at Western University.

Her work – and that of 17 of her fellow practicum students – is being showcased in the Artlab Gallery at the John Labatt Visual Arts Centre until April 7.

It’s the way objects relate to and function with one another in space that really intrigues Sinclair. Her installation (an artistic genre composed of a three-dimensional work) is a reflection of her desire to experiment with the position of everyday objects to create meaning. 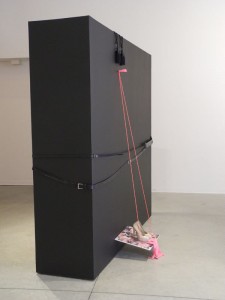 The big black box, girdled by belts and decorated with everyday objects
Photo by Patricia Barrett

When you step into the gallery, your eye is immediately drawn to the big black box in the corner.

“The black box is sexy, yet it’s secretive,” said Sinclair, who graduates in June.

It represents her exploration of the different roles society expects women to adopt. And it’s also an exploration and critique of who she is, she said.

What’s most striking about the work are the pink rubber gloves pinned beneath a pair of ivory-coloured platform shoes with three-inch heels perching on a swing. The seat of the swing is decorated with wallpaper depicting kittens.  Two velvet tassels – the kind you might find adorning a stage curtain – hang above the swing. 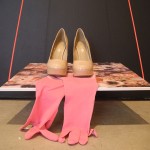 It suggests the role of caretaker paired with that of sexy performer.

And that’s exactly what Sinclair wants you to think.

“I was basically looking at the two biggest dualities in womanhood,” said the Aurora, Ont., native. “That of being a badass or being a girly girl. So the black wall really kind of captured that hardcore, butch thing. But black is also a very sexy colour. Like your little black dress.”

She said she wrapped black belts around the box to give it a human-like structure.

“Those are things we see all the time and take for granted,” said Susan Edelstein, director of the Artlab Gallery.  “It’s really quite provocative.”

As Sinclair moved through each year of her four-year fine arts degree, experimenting with drawing and painting and other artistic media, she said she found herself drawn to curating.

“At the end of my third year, I was into framing, which led to that curatorial idea of how things function with each other.”

This year she curated the vitrine – or the gallery under glass – that flanks the wall outside the Artlab Gallery. 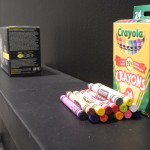 The visual similarity between crayons and tampons is striking.
Photo by Patricia Barrett

But curating is not something art students can take on shortly after completing a bachelor’s degree.

The importance of volunteering can’t be underestimated, said Edelstein. “For any new graduate, it’s important to get yourself – and your work – out there.”

She said she tells students to volunteer in galleries or museums.

“These things can help them make connections and understand what it’s like to be in the working world. So it’s not just a dream of ‘I want to be a curator.’ You don’t suddenly make that jump when you’ve graduated.”

Volunteering is just what Sinclair intends to do.

That could entail creating archival records of paintings or sculptures in Museum London or packaging paintings in the Michael Gibson Gallery, she said. 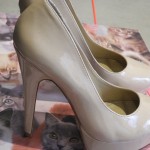 Platform shoes on a swing
Photo by Patricia Barrett

“It’s to get your foot in the door and work your way up,” she said.  “It’s all about the experience.”

Self-promotion can be an important tool to help students transition to the working world. Sinclair said she showcases her work on her own website.

She realizes it’s not easy for artists to become the next Andy Warhol; there’s a lot of paperwork and legwork, she said.

“You would apply for what’s called a Call for Submissions in order to get your work out there either in London or in Toronto,” she said.  “The next step would be to get sponsored or picked up by a gallery.”

And if the artist sold any paintings, the gallery would get 40 per cent of the sale, she said.

But that’s not the route she wants to take.

“Through my art, I’ve honed in on the specific placement of things.”

And she said she’s willing to take on any role that brings her one step closer to becoming a curator.

“You have to have the drive and the ambition. Work long hours and put it out there. Roll up your sleeves, get dirty,” said Edelstein. “If they make that commitment to themselves, something will happen.”

Sinclair said London’s art community – and specifically her practicum class – has been “a huge help” in the development of her skills.

“I really like working with other artists, so I want to be a curator of a gallery. Potentially my own gallery to support young, emerging artists.”

Mackenzie’s studio space on the third floor is no bigger than a bathroom in a one-bedroom apartment. How did she complete a large piece in a small space? Click here.