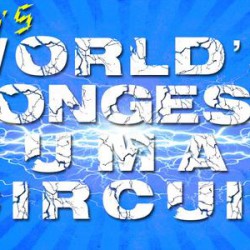 By Katherine Geleff on March 27, 2015 in Community

The city could be getting its name in the Guinness Book of World Records.

That’s thanks to Londoner Ryan Hunt. He’s attempting to organize the longest human circuit ever. “Humans are great conductors because we are giant bags of water,” said Hunt, 28. “A small current is going to pass through everyone and it’s going to either light up a light or trigger a rocket – something impressive.”

For those of you who are blanking on their grade school science, a circuit is a path that electricity flows through.

In this case, Hunt is going to use people as conductors of electricity. He assures everyone that it won’t hurt.

“When people hold hands they get a little bit sweaty, which makes for a better conductor. Using the electrons that are naturally in our body it will translate quite nicely,” said Hunt.

Hunt hopes to get at least 1,500 people involved in the record breaking project.

“It will be a good community building exercise,” said Hunt.

This isn’t the Londoners first attempt to bring the community together.

Hunt is one of the co-founders of the The MakerBus, “Canada’s first mobile makerspace and digital humanities classroom.”

The concept is simple. The MakerBus is a mobile classroom where people in the London community can learn about technology and humanities.

“It’s all about critical analysis, critical thinking, talking about the larger social ramifications of technologies combined with your practical science and technology training,” said Hunt.

It all started in 2013, when Hunt and his friends bought an old school bus. Then, naturally, they turned it into a classroom.

Since then, the project has grown and Hunt is seeing the positive effects of his work.

“It’s been incredible,” he said. “It’s gone in a direction I never would have anticipated.” It’s at the MakerBus where Hunt and his colleagues came up with the idea for the human circuit.

This month, the team was awarded a $1000 grant from Awesome London for their idea. Hunt hopes to use this money to pay the $700 administrative fee to the Guinness Book of World Records.

Hunt sees this grant money as validation that the human circuit is an awesome idea.

Now, Hunt and the MakerBus team are trying to attract community support for the project and find a venue big enough to hold the event.

He hopes he can organize the world record event for this summer.

For him, it’s a way to show the world how amazing the city of London is.

“They’ll be thousands of people standing in a circle, holding hands, sharing in a communal experience.”