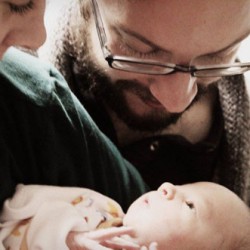 By Selina Chignall on February 17, 2015 in Community

In the morning, Mylon Ollila spends time with his newborn son Sébastien, who sleeps against his chest while he watches television.

Being a father is something Ollila finds hard to put into words.

Ollila, 27, who lives in Timmins and works as a policy analyst at the Wahgoshig First Nations, says he wanted to be an involved parent from day one. He saved up all his sick days and holidays to take time off, so it wouldn’t cut into his wife’s parental leave.

“There’s nothing specifically targeted for fathers,” he said.

Fathers like Ollila are eligible to take paternity leave, but in Canada, the only province to have leave specifically for fathers is Quebec. The policy was implemented in 2006 as part of the Quebec Parental Insurance Plan.

In that province, a father is given five-weeks’ leave with roughly 70 per cent of his earnings. On average, most fathers take 5.6 weeks in Quebec, while countrywide it’s only 2.4 weeks, according to the recent report, Time to Grow Up-Family Policies for the Way We Live Now, from the think-tank Canadian Centre for Policy Alternatives.

The report findings show that five years after the policy was implemented, 76 per cent of fathers have taken leave in Quebec, whereas in the rest of Canada, it’s only 26 per cent.

“It’s not telling us that men in Quebec love their kids more. It means that fathers outside would like to spend more time with their kids. We can do something to facilitate that,” said Katie McInturff a senior researcher at the Ottawa-based institute and co-author of the report.

Having the father spend time with the baby also benefits the mother, as it distributes the burden of childcare more evenly between the two parents, said McInturff

“There is a positive impact on women and helps balance their work and family lives,” she said.

Despite the supportive reaction from Ollila’s colleagues, he said if he was at his old job in the mines, his co-workers might have laughed at him for taking time off. 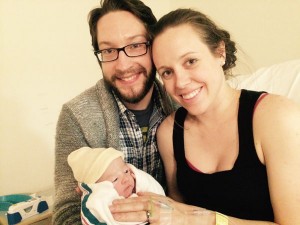 Ollila’s situation speaks to the larger issue of the work culture of the fathers’ profession. Others interviewed for this story mentioned that the type of workplace can influence a decision on whether to take parental leave.

Adam, 25, a financial analyst at a major financial institution in Toronto, who asked that his last name not be used, works in a male-dominated, high-pressure environment. He says employees are electronically connected to the office and need to be reachable all the time.

Adam noted some people take a few days or weeks off, but rarely more than a month. If they did take an extended leave for parenting, it would be challenging. “There would be some pressure to return as soon as possible or to be reachable during that time,” he said.

Adam says he would like to take some paternity leave, but doesn’t know for how long. People accept a woman taking leave because of the physical nature of giving birth, he said.

“I think people are more understanding of a woman taking nine months off than if I did.”

So what are the benefits of father-baby bonding?

Research suggests fathers who spend time with their babies feel warmer towards them and feel less stressed out about them, said Anthony Volk, a professor in the department of child and youth studies at Brock University.

Volk says it’s a win-win situation, having fathers spend time with their offspring. He says it’s a question of whether society and employers are ready to move towards supporting new dads.

Paternity leave for fathers may not be implemented across the country because policy makers haven’t put much thought towards the initiative, said senior researcher McInturff. “Even with the European countries who have adopted it, it hasn’t even been around for more than five years,” she said.

Despite the benefits of father-baby bonding, the Ontario provincial government does not have any plan to implement a Quebec-style policy anytime soon.

“The Ontario government has no immediate intention to amend the Employment Standards Act to add a new job protected leave for fathers,” James Carleton, a spokesperson for the minister of labour, said in an email.

The ministry is reviewing the province’s employment and labour standards and is considering reforms to better protect workers, Carleton noted.

Ollila would like to see the government implement a policy similar to Quebec’s across the country because it would encourage fathers to take time off. Having the chance to spend one-on-one time with his son, who was born Feb. 2, is something he has enjoyed while being at home, he says.

“It makes you feel so good seeing this little guy who is so dependent upon you. I love having that kind of responsibility. Sharing this little baby with my wife that we made, we feel like a family.”