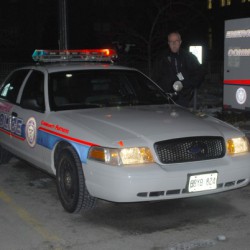 A night shift for Western University’s Campus Community Police Service is like a bubble waiting to burst.

At a given moment it can be still, tranquil, boring, devoid of action, but also fragile and ready to pop.

And when it pops, an officer can be gunning the engine of a police cruiser, racing hard toward the scene of a potential crime.

That’s how it was at about 2 a.m. on March 1 for Acting Sgt. Scott Hessel. Hessel, 56, was on a routine patrol of Western properties when Special Const. Ryan Fairful – working as a dispatcher – broke in with a radio call.

“Just got a call from grounds,” Fairful said, referring to the university’s facilities management crew. “They’re over at Springett (Parking) Lot and they’ve got a car purposely driving on the grass.”

Within seconds, Hessel was hurtling toward the parking lot, where another officer – Special Const. Lee Pressey – was waiting with a suspect caught driving on a grass-covered traffic island.

“OK, so this guy’s been drinking,” Hessel said of the driver, after arriving at the scene and conferring with Pressey about the situation.

“We’re going to get the blow box (a device used to test blood alcohol levels) and go from there.”

Hessel drove to the campus police station at Lawson Hall, retrieved the blow box and returned to the scene, where a test showed the suspect’s blood alcohol level was below the legal limit.

The suspect was free to go, but his car would be parked in Springett overnight.

“He could probably drive again if he wanted to,” Hessel said later.

“But if he’s wise and he knows that Christmas came early – park the damn thing and go to your home and sleep. Leave it there. That’s it.”

Everything was tranquil again – almost boring and devoid of action – as Hessel resumed his patrol.

Just as quickly as the old bubble burst, a new one began to form.

This is campus policing at Western, where a typical night can bring alcohol or drug-related calls, responses to medical emergencies, or calls about staff locked out of buildings after hours.

A force of 16 men and women patrols the main campus and its affiliates – Brescia, King’s and Huron university colleges – 24 hours a day, all year round.

The force keeps tabs on a campus population of more than 31,000 that Hessel, who spent 34 years with the London Police Service before coming to Western, compares to a small city.

“It’s like a small St. Thomas,” he said. “That’s what we’re looking after. We have a huge area to cover with the amount of manpower that we have. But we do a pretty good job as far as I’m concerned.”

The force has full police powers on Western-owned properties and works with security guards, fire departments, emergency medical services (EMS) and the Student Emergency Response Team (SERT) to ensure the safety of staff and students.

Calls for help are routed through a communications centre at the campus police station, where Fairful was handling dispatch duties in the early morning hours of March 1.

When a call comes in, the dispatcher takes pertinent information and passes it along to officers or other emergency workers.

The dispatcher can also check to see if a suspect is in police databases, if their licence is suspended, or if they’re wanted for a crime, Fairful said in an interview.

“Sometimes it’s slower like right now, but then there’s some times when you wish you had 15 hands up here.”

About 34 notable calls took place between 1 a.m. and 4 a.m., and Fairful was busy monitoring phones, radios and a bank of screens that keep track of everything from 911 calls to fire alarms and security cameras.

During the interview, Fairful paused to send Pressey to inspect pry marks on a few doors at a medical science building.

A few minutes later, he was telling Hessel about a man heading toward main campus after being asked to leave University Hospital.

“I’ll zip over there,” Hessel said before heading off into the night again.

“When it rains it pours,” Fairful said.

No one knew what the next few hours would bring.

All anyone knew was a bubble had burst, and that more bubbles would likely form and burst before the sun came up.