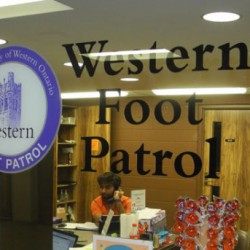 The phone rang, breaking through the chatter from people huddled around a desk during their evening break.

Manan Bhatt, a Western University Foot Patrol volunteer, picked up the receiver and listened intently to the voice on the other end.

His face was grim as he turned to fellow Foot Patrol volunteer, Chelsea Montgomery.

“There’s someone driving around in a gold car, saying they’re Foot Patrol,” he said.

She looked back at him with a concerned look on her face.

“Yes. I think it’s best if you talk because then it’s first hand,” said Montgomery.

Eight pairs of eyes stared around the room at one another.

“Wow. Creepy,” the people around the desk said, almost in unison – feeling and knowing something potentially dangerous was happening on campus.

After some discussion, followed by silent contemplation, one of them turned to the reporter in the room and said, “Things like this never happen!” The group peered at the reporter quizzically, wondering if she had planned it.

She hadn’t…But she couldn’t have picked a better night to find out what the Foot Patrol really does on campus.

“It’s good to have someone out there keeping an eye on things. And it lends students peace of mind knowing that there are people willing to walk with them,” she said.

The team operates from 5 p.m. to 1 a.m. weeknights, and 6 p.m. to midnight during the weekend. It has 254 volunteers, although only 10 people, broken into five co-ed pairs, are working at any given time.

Tonight, Page Boudry and Jordan Campbell are working their usual Thursday evening shift. They spend from 8 p.m. to 11 p.m. walking an assigned beat—one of five sections of campus property. They are happy to be doing their part, helping out other students.

“It’s a lot of fun,” said Boudry, 20, a second-year chemistry and biology student. “You meet a lot of people this way.”

“I signed up because I thought it would be more fun to do this than any other kind of volunteer work you can do,” agreed Campbell, 19, also in his second year in kinesiology. After the drama with the gold car had died down, Boudry and Campbell geared up to go back outside. They grabbed the reflective Foot Patrol jackets, flashlights and radios they use to communicate with Montgomery at the main desk. If it was raining, they would even grab an umbrella.

Outside, the winter air was damp and cold.

As they walked along, the words “Foot Patrol”—written on the backs of their jackets—glowed in the dark night, acting as a beacon to students seeking safety on a lonely walk.

Along their route, Boudry and Campbell test campus mechanical equipment, such as street lights and blue emergency phones that link to campus police, as well as pick up stray students along the way.

“It’s really funny when you get big buff guys coming from the gym. They yell, ‘Hey Foot Patrol, you wanna’ walk us home?’ ” said Boudry.

“It’s more like they’re protecting Foot Patrol than the other way around,” Campbell said and laughed.

While they rarely feel threatened on campus, the Foot Patrol has a no-intervention policy. They may need to call campus police in certain situations they come across, such as when someone has been drinking too much and can’t walk safely on their own, said Boudry.

On this night everything is running smoothly. Boudry and Campbell finish up a last round of walking and head back inside to return their equipment, say their goodbyes and sign out.

By the time Boudry and Campbell leave the Foot Patrol office, 14 people have used the service–although not all were walking. The Foot Patrol isn’t just on foot.

Tonight, the most popular escort was the Foot Patrol SUV—a 2005 Ford Escape Hybrid also available to students on campus needing a safe escort to their destination.

As for the gold car, or the man in it, neither was seen again, but Campus Community Police  Sgt. J.C. Aubin said the Foot Patrol team’s contribution was valuable, nonetheless.

“They called us to report it and we investigated. We’ll have police pulling gold cars over all week, looking for him,” he said.

Aubin agrees Foot Patrol’s presence is a solid crime deterrent. “If someone’s going to commit a crime, they’re not going to do it when people are walking around,” he said.

“Visibility is big for prevention, so them just being out there is a big deal,” he said.

Campus police pierce the darkness
A jazzy kind of night