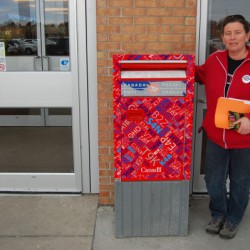 The end of door-to-door Canada Post delivery isn’t the only thing that’s having an effect on letter carriers.

Jude McHugh, who has worked at Canada Post for 20 years, describes the effect that other changes begun two years ago have had on letter carriers as “life-altering” and “drastic.” And she doesn’t like the way things are headed for the corporation.

“It started in Winnipeg about two years ago,” she said. “It started coming fast and furious to have – the same as everywhere else – less bodies do more work.” Community mailboxes like this one in Shawnigan Lake, B.C., are coming to Canadian cities beginning this year.
Photo Courtesy of Kim Wildfong

These changes have impacted everyone at Canada Post, says McHugh of London, Ont.  Letter carriers are now dealing with a so-called restructuring of routes. This means there are now fewer routes, so that a route that at one point had 600 mailboxes on it, could now have upwards of 1,000.

“You cannot find a letter carrier right now who is saying ‘I love my job.’ They’re overburdened mentally, physically exhausted, they’re overworked and forced to do overtime,” McHugh said.

Tina Berdan can relate. Berdan, a 34-year veteran at Canada Post, is a letter carrier in the southern part of London.

“I love my job, I love my customers, but the impact this (restructured route) is having on my body – mentally and physically – is so negative,” Berdan says. “An eight-hour day is no longer obtainable at Canada Post.”

But it’s not just mail carriers feeling the effects of these transitions. Canada Post is also removing the big, red letterboxes where people can drop off their mail.  This has been especially difficult for seniors.

“For our seniors, what they do is leave mail on the top of their boxes in hopes that a letter carrier would actually pick up their mail, because they don’t have access to the (public letterboxes) anymore,” said Berdan.

But with the impending growth in Canadian cities of community mailboxes – where you go to pick up your mail – some seniors will soon not just have trouble sending letters, but receiving them as well.

“Many of the seniors on my route, they can’t get out down the road to a community mailbox,” McHugh said.

McHugh also said that Canada Post may not have thought through the financial ramifications of eventually having all Canadians get their mail at a community mailbox.

“Who’s paying for all this? Where are these ugly pieces of street furniture going to be sitting? Nobody wants them on their front lawn,” said McHugh. “(Canada Post) is going to buy them and is stating we will maintain them, but experience has shown us they don’t maintain them.”

McHugh is not the only one questioning the move toward community mailboxes. Hundreds of municipalities across Canada – including London – have passed resolutions against their introduction.

“This is not just a federal issue, but a municipal one as well,” said McHugh. Having the mailboxes raises safety issues because they have to be properly lit at night and they could create traffic problems when people stop by them to get their mail, she said. “Canada Post has already said that when we get to downtown Toronto, we’re going to be in a tough spot.”

Despite making a profit for the last 15 of the last 16 years, Canada Post says it needs these community mailboxes because the current system is financially unsustainable.

But what about other ways for Canada Post to increase revenue? McHugh has one suggestion: postal banking.

Postal banking – a national postal corporation also operating as a savings bank – existed in Canada until 1968 and was especially beneficial to remote communities that had limited banking access.

“The postal union commissioned a study that showed, just like in other countries, postal banking would be a real money maker,” McHugh said.

But at least for the time being, the changes underway at Canada Post won’t include postal banking, even if ex-Toronto area MP Olivia Chow and former Bloc Quebecois leader Daniel Paille have endorsed the idea. Attempts to reach Canada Post for a comment were unsuccessful. The list of cities and organizations calling for a continuance of door-to-door delivery is still growing.
Photo by Ben Fraser

As for the changes that have occurred and are on the way at Canada Post, they have left some staffers questioning what’s happening at their workplace.

“As a human being I don’t really feel respected. It (the changes) has definitely impacted the way I feel about the people I work for,” said Berdan.

“I feel very sad,” McHugh said. “There was a time I wore my uniform proudly. It pleased me to know I was part of such a wonderful service.”

“There’s no pride left. None.”