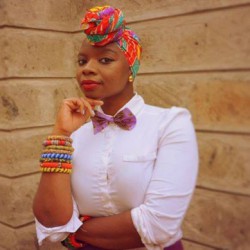 By Sumayya Tobah on February 17, 2015 in Community

“I remember in elementary school, whenever Black History Month would come around, people would treat me with such a celebratory tone – like it was my birthday or something. But it’s, like, we’re still black the other 11 months of the year.”

Staasia Daniels’ statement elicited laughter, cheers and even a light applause from her audience. The black Canadian singer was performing at Western University for the Black History Month opening ceremony during the first week of February.

Students had gathered to share their experiences, feelings and frustrations from the perspective and voice of a Canadian of colour.

Again, the reaction from the audience was one of agreement. Heads nodded, smiles exchanged between strangers.

The discussion that emerged after the ceremony highlighted the difficult question of how the black Canadian narrative can be appreciated all year round. The answer seemed simple enough: education.

Canada has an extensive, independent black history of its own, and yet this month is often dedicated to celebrating the American narrative. Even at the academic level, there are few courses, in university and even fewer in high schools, dedicated solely to the study of black Canadians.

Rita Nketiah, a Women’s Studies PhD candidate of Ghanian descent, says there is a real interest in black history, especially at Western. “Students definitely have a desire to learn more about their own histories here in Canada,” Nketiah said. “I don’t know that the administration has quite caught up to that yet, but there’s definitely a demand for it.”

Nketiah’s wrists are heavy with multicoloured bangles; they bang together as she speaks with her hands, her eyes wide with enthusiasm. She recalls growing up in Brampton, with the support of a predominantly black community. She says she wondered at a young age how she entered what she calls the “cultural Canadian narrative.”

“On the national stage, we were very white. Our politicians, media – none of them looked like me. And yet I was also being given this rhetoric of ‘oh, we’re so multicultural, we’re so diverse,’ but I didn’t see it. And it was around the fifth grade that I started to ask questions. Why am I not seeing myself reflected?”

“I had to take the initiative to go out and find my place in Canadian history. We never mentioned it in class.”

Nketiah says teaching black Canadian history in schools, particularly with students in high school, would help create an inclusive idea of what it means to be Canadian.

“I think there’s definitely a need for us to look at our histories, to say ‘we’ve been here,’ and we’re not this recent phenomenon.”

But as of now, there are no high school courses fully dedicated to the teaching of black Canadian history, according to Historica Canada consultant Natasha Henry.

“Educators and scholars are pushing for more inclusion in the Canadian history curriculum,” says Henry, “People’s interests are picking up, but we can’t deny we’re behind the times.” Henry, currently writing her thesis on teaching black Canadian history, says there is no shortage of information to teach, but that educators are simply unprepared.

“Our history is rich and exuberant, but high school teachers and sometimes even university professors just do not have the knowledge to teach those courses on a regular basis.”

Henry says any classes that go beyond the mainstream understanding of Canadian history depend entirely on the initiative of individual teachers.

“Locally developed courses can offer a look into black Canadian history, but it’s never on a school board basis,” she says. “We have nothing concrete, nothing consistent, nothing permanent.”

But Henry is optimistic.

“I was brought on to help revise the guide,” Henry says. “With the revision, we hoped to bring forward a space to explore the black Canadian perspective.” Teachers are using the novel “The Book of Negroes” by Lawrence Hill in black Canadian history courses.
Photo courtesy of Lawrence Hill

The initial guide was centred on the novel, “The Book of Negroes,” by Canadian author Lawrence Hill. By using Hill’s work of fiction, teachers were able to present a new way of thinking to their students. It brought forward an area of study often dominated by the African-American legacy.

And although many classrooms now use his work to teach the black Canadian story, Hill said in an interview his intention was never to revolutionize how Canadian history is taught.

“I just wanted to tell this incredible story,” Hill says of his work, based on a historical document used to keep track of African-Americans entering Nova Scotia. “I was just so amazed that we had all this history and no one had ever written it in a dramatic way.”

Hill calls the effect of his novel on Canadian classrooms a “happy byproduct.”

“Black history, from my understanding, is taught quite minimally in classrooms these days. Teachers will rely on To Kill A Mockingbird, or maybe Huckleberry Finn, and think ‘well, that’s enough’ in terms of exposing people to issues of racism and segregation.”

He agrees with the notion that the place to begin is to educate our educators.

“So we not only need to teach the students who want to be teachers one day,” but it’s important to get the material into the hands of current teachers, Hill says.

“But the times are changing; the guide is a great first step, and there are all kinds of apps and materials for those interested in the material. It’s all there, we just have to lead them to the water.”