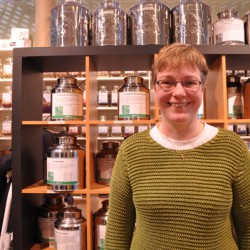 A goddess of mercy once led a poor farmer to a single tea shoot. With the budding plant, he prospered through the creation of flowery oolong tea—at least according to the website of mass specialty tea producer David’s Tea.

Their version of this godsent blend is “hand-produced on a small family garden near the Wuyi Mountains (in China),” and distributed across their chain of 106 stores in Canada and the United States.

The store is one among many North American brands that have been gaining momentum over the past five years—starting in 2008 with a single shop on Queen Street in Toronto.  Teavana—another specialty tea shop—was bought out by mass coffee producer Starbucks in January.

“It’s a very vibrant industry if you ask me right now, very vibrant,” said Louise Roberge of the Tea Association of Canada. “Tea is definitely growing in popularity, and I would say especially specialty tea.” 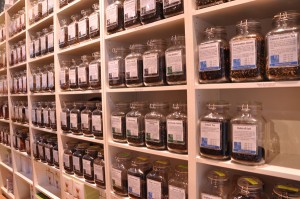 The Tea Haus in the Covent Garden Market sells over 200 kinds of loose-leaf tea.
Photo by Rebecca Field.

Specialty teas—not your average Tetley, Twinnings, or Red Rose tea bags—currently account for 60 per cent of the tea market share, according to statistics from the Tea Association. Canadians drank close to nine billion cups of tea in 2012—a number that is expected to grow by 20 per cent over the next six years.

Roberge said the growth is due to an increasing awareness of the health benefits around tea, an increase in travelling youth, as well as the diverse range of immigrants from “tea-drinking” countries.

Tosha Bunch, 23, a student at Western University, noticed a jump in tea consumption on campus and decided to give tea a try herself, now drinking it at least once a day.

“At the beginning of the year if I went to The Spoke and asked for a chai tea, they didn’t have it, and now they do,” said Bunch, who attributes more tea drinking to the amount of stores that have been popping up.

“I guess to me it was ‘oh everybody else is doing it, so might as well try it,’ ” said Bunch. “Peer pressure in a way.”

After getting requests for more tea education, the Tea Association has been leading “Tea Sommelier™” courses in more than 60 colleges across the country. Potential sommeliers learn about the history of tea, different kinds of leaves, health benefits  and how best to prepare it. Roberge compares the courses to wine tasting courses you might find at the LCBO.

“I think it’s a way of the industry to make money because it’s a trend,” said Stefanie Stolzel, co-owner of The Tea Haus in London’s Covent Garden Market.

Stolzel and her husband, Michael Schmidt, moved to Canada in 1998 from Germany. After realizing that loose-leaf teas were hard to find in Canada, they opened their shop in 2000. They now sell over 200 kinds of loose-leaf tea, mostly from German distributors.

“We were probably one of the first companies to carry rooibos in Canada,” said Stolzel, who has noticed an increase in customers with more awareness about specialty teas from the marketing involved with stores like Teavana and David’s Tea. “Now everybody has rooibos. Everybody knows what rooibos is.”

Along with an increase in stores and education, annual tea and coffee shows have become more prevalent across Canada—Toronto having its first Tea Festival in 2012.

“For us, tea is more of something that’s part of a more relaxed lifestyle rather than rushing around,” said Stolzel. “We only started a year ago to serve teas to go.”

A revolution in education
Anglers hooked on urban fishing