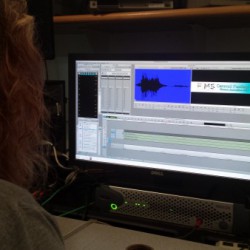 The last class of Western’s Master of Arts in Journalism program plans to finish the year on a high note next week with a festival celebrating the students’ best work.

The Canned Festival will run all day Tuesday, April 14, during the journalism school’s last week of classes, in the studio on the second floor of the North Campus Building.

Each student was asked to select their best piece of work from the year to be showcased at the festival. They run the gamut from light-hearted to serious – from a TV feature about Ontario’s microbrewing industry to a radio “tape-talk” segment examining the phenomenon of bad science reporting on the issue of vaccinations.

Dane Wanniarachige, 22, submitted his radio documentary about dissociative disorder to the festival. The five-minute piece tells the story of a young man suffering from the condition, and weaves interview clips together with recordings of the man playing his guitar to form a narrative about what life is like with dissociative disorder.

“Adding narration would take away from the story, because it’s such a personal story of how he uses music and art as therapy,” Wanniarachige said. “He can tell the whole story. I think it was pretty powerful like that.”

The projects will be played one at a time throughout the day Tuesday. Each student will introduce his or her piece, and then be available for a brief question-and-answer session afterwards.

The journalism school has invited everyone in the Faculty of Information and Media Studies community to the event, but anyone with an interest is free to drop by. Audience members can come and go as they please throughout the day.

The Canned Festival – a reference to work that is completed and ‘in the can’ – is an annual tradition for the journalism school, but this year it holds a special significance. This is the final year of the Master of Arts in Journalism degree, as the program is being replaced next year with a Master of Media in Journalism & Communication degree.

Though run by much of the same staff and faculty, the new program will be structured differently next year, and the future of the Canned festival is unclear, said Erin Carroll, technical director at the journalism school.

So will this be the last Canned Festival?

“That’s really a tough question to answer,” Carroll said. “I would hope that we would do some kind of honouring of people’s work. But it’s going to be really hard, because according to the way the new program is set out, in third term [the students] don’t come back.”

Regardless of whether the festival continues, the students are looking forward to sharing their work with the FIMS community – and with each other.

“I’m really excited,” said Azzura Lalani, 22, another student in the program. “It will be so much fun to see what everyone’s done, and it will be a great way to look back at our year and see how we’ve all grown as journalists.”