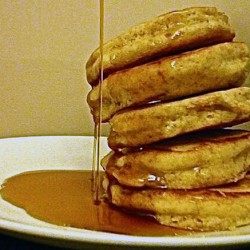 It’s a crisp spring morning at Rolling Ridge Maple Farm, and Jay Robson  is demonstrating how he gets maple sap out of a tree. Wearing rubber boots and coveralls, Robson points to a piece of tube running from a maple tree.

“For gathering sap, we are on a pipeline and tubing system under a vacuum pump,” Robson, 57,  said at his maple bush near Ilderton, Ont. “We turn it on when the saps runs, so it literally sucks the sap from the tree, down to a collection point and is pumped back to our sugar shanty where it’s processed.”

Robson is a farmer and has been making maple syrup commercially for about 25 years. He says the syrup season lasts about six weeks, which keeps him busy when he’s not growing corn, soybeans and wheat.

Like most maple farmers, Robson is aware that many experts believe climate change has the potential to affect the maple syrup industry. They say it could lead to a host of issues, including unpredictable weather and precipitation patterns. Jay Robson is a long-time farmer who says the weather is always hard to predict.
Photo by Selina Chignall.

Robson says the weather determines his day-to-day operations, but he’s not certain if climate change is impacting his maple trees, because the weather has always varied and “is hard to predict.“

Robson might not be certain about how climate change may alter his business, but Brenda Murphy, a professor in the department of geography at Wilfrid Laurier University, says weather volatility is just one stressor brought on by the effects of climate change  that could impact maple trees.

“Climate change is a fleet of stressors that the trees are going under, more and more and faster and faster, and are having troubles of adapting,” she said.  Murphy started studying the effect of climate change on maple trees about seven years ago.

Maple trees live between 200 to 300 years. This means trees have been exposed to increasing environmental stressors like air pollution and unpredictable weather, Murphy said, adding, these factors can alter the length of the maple season. “The issue is, are there going to be changes that happen so fast that the trees can’t catch up, and the farmers can’t catch up? That is our concern for the future,” she said.

The concern is real for an industry that in 2011 generated $53 million in the Canadian economy and created 1,700 direct jobs and 1,300 indirect jobs, according to the 2013 report, Economic Impacts of the Maple Syrup Industry in Ontario.

It’s a growing industry and is a source of good jobs for Ontario’s rural economy, says Ray Bonenberg, president of the Ontario Maple Syrup Producers Association. He said events such as maple festivals thrive off maple syrup production.

Bonenberg, who lives just outside Pembroke, a town two-hours west of Ottawa, has been making maple syrup there since 1999, but said he has been doing it his entire life.

Many maple producers are farmers who produce maple syrup as a cash crop in addition to their other operations, he said. “In March and April you’re not on the land so it’s an ideal time if you have a sugar bush … If marketed properly it can be financially viable.”

It can boost the rural economy because producing syrup requires fuel, equipment and materials that are bought in local stores, which helps contribute to the town’s economy, Bonenberg added.

Because of the economic benefits of the maple industry, he’s concerned about the impact of climate change, especially with the introduction of invasive species like the Asian long-horned beetle.

“The problem with all invasive species and other environmental threats, such as air pollution, is that these threats make maple trees less healthy and this is then compounded by the stress of climate change,” Murphy said in an email.

Although the destructive beetle has not invaded the maple ecosystem yet, Bonenberg says it’s a concern for maple producers.

Robson echoed Bonenberg’s concern over the potential damage the beetle could unleash on the maple tree because it’s a natural host for the bug. The Asian long-horned beetle is an invasive species that could destroy the maple ecosystem. Photo from Wikimedia commons.
Photo by David J. Barber.

“If they [Asian long-horned beetles] get out of control, there would be widespread damage and it could destroy our industry very quickly,” Robson said.

“The bugs are hard to kill, they don’t succumb to -35 degree weather,” added Bonenberg.

Despite the fear of the damage the beetle can cause, Robson isn’t too concerned with climate change for the moment, and says a few degrees of warmer temperatures wouldn’t affect his sugar operation.

Boneberg agreed, saying, “Are we in immediate danger? No. Are we worried in the long term? Yes.”

Maple trees don’t start creating sap until they are 40 years old. This is a concern for farmers when thinking about renewing maple bushes, Murphy said.

“You have to think differently if you think the climate is going to be different in 40 to 50 years. You need to find ways to adapt,” she said.

Despite these challenges, maple producers are finding ways to adapt to climate change.

These include changes in forestry management, the way maple producers collect sap and the controversial idea of assisted migration, say the experts interviewed for this story.

Assisted migration helps a population of species or plants move when it can’t do so on its own and needs to because of negative impacts such as climate change or growing infrastructure, said Laura Gray, a post-doctoral fellow at the University of Alberta.

“What it means is if a tree can no longer survive or be as productive in an area it once was, we can take that species and plant it somewhere more favourably,” said Gray, who holds a PhD in forest biology and management.

She said one of the major issues of assisted migration is the threat of invasive species. When it’s a tree being moved, pathogens or pests might come with it. Introducing it into a new environment, where the species didn’t exist previously, runs the risk of the species itself or associated species becoming rampant.

“It’s the main reason why people are against assisted migration,” Gray said, who suggested it was one strategy of helping offset the impact of climate change.

Murphy suggests maple producers could use maple seeds adapted for warmer climates to help ensure when in 40 to 50 years, if the climate is warmer, the trees can handle the climate. Bonenberg agreed that it’s important to understand, mitigate and adapt to what is coming. “You need to adapt to these changes, so you don’t have to mitigate more.”

So why should we care?  Those interviewed for this story argued that maple syrup isn’t just something sweet to pour on our pancakes. It’s part of our Canadian identity.

Jaime Clifton-Ross is currently finishing her Masters of Museum Studies at the University of Toronto. While on internship at the Royal Ontario Museum,  she wrote a blog post about the history of maple syrup production in Canada and its importance for early settlers.

“It was a first instance of multiculturalism because newcomers learned it from the Anishinaabe and other First Nations bands, they adopted a practice that was not their own,” Ross said. “It brought different communities and cultures together.”

“It’s a connector in this country, it’s what Canada is known for.”

Media not inoculating anti-vaxers’ fears
Board of the mountains, snowboarders take to the streets