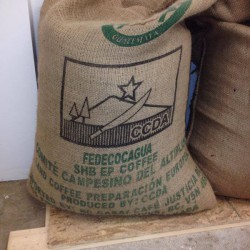 As the coffee industry booms, local shops are working hard to promote ethical business practices both in and out of their communities.

Kingfisher Coffee Co., on Meadowbrook Drive, is a roasting company that has been donating one per cent of its coffee production to two homeless shelters since January.

It’s a good way to “show them respect and consideration, while helping offset some of their daily operating costs on a monthly basis,” said Patrick Dunham, co-founder and part-owner.

The company imports its coffee beans from nine different countries. Its product, says Dunham, is certified Fair Trade, and comes from the Rainforest Alliance, a company that works with farmers to develop sustainable business practices and partnerships with companies around the world.

The reason Kingfisher Coffee has been donating to the shelters, said Dunham, is because they wanted to bring the idea of practising business with a heart back to their own community. “We want to close the loop from Fair Trade, Rainforest Alliance and ethical sourcing to being an ethical business right here in (London),” he said.

Dunham decided to donate coffee rather than money because it will mean they can increase their donation as they expand production, independently of their profit margins.

Many other companies have adopted the one per cent model, as well. But Dunham said they usually adopt it down the road, as they start turning a profit.

“We started doing it right away,” he said.

The time to get into the coffee game couldn’t be more appropriate. The café business is booming, and new restaurants and independent cafés are popping up all around London.

“(We) opened (on) January 1,” said Dunham, “and we already have a good customer base…throughout the city.”

Dunham and his business partner, Mandy Etheridge, have opted to be a wholesale rather than retail business, even though many other roasters have elements of both. This allows them to partner with like-minded shops that meet their ethical and quality standards, said Dunham.

One Saturday in March, Dunham was at Locomotive Espresso café, on Pall Mall Street, showcasing his brand. Although Locomotive Espresso isn’t making plans to partner with him, manager Sarah Cox said it is more about showing solidarity with local coffee vendors who also have ethical practices.

Locomotive Espresso gets its coffee from Pilot Coffee Roasters, a company based in Toronto that engages in direct trading practices, which means the roasters are in direct negotiations with the farmers to ensure fair deals and treatment without a middleman.

“They’re actually getting on planes and meeting the growers on their farms,” said Meaghan Bennett, part-time manager at Locomotive Espresso.

Dunham said he is confident about the future of Kingfisher Coffee. He hopes that as the business grows and they tap into new markets, they will be able to increase their presence in the community.

“We hope to offer new and unique products…like natural flavoured coffees,” said Dunham. “We have our ethical and quality standards and hope to find more partners within those frameworks.”