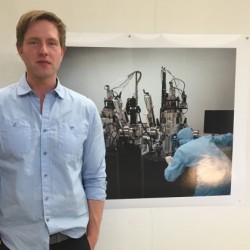 Spring isn’t the only thing that’s coming to town today.

Student artists at Western University are opening up their studios and showing the public what they’ve been working on all year.

“Artists opening up their studios is great for the public to see, as it allows them to see the process of an artist”, Mark Kasumovic said, one of the organizers of the event.

Students have set up their own section in each studio – with photography, sculptures, and paintings popping out everywhere you turn. Some of the artwork is complete, while other pieces have just been started. So it’s a great event for people to come in and talk to artists while they’re in the middle of transforming an idea into reality, Kasumovic said.

The artists are all students at the university, in one of three programs; bachelors of fine arts, masters of fine arts, or PhD in studio art. Kasumovic is in the PhD program, studying photography and its relationship to networks and the transmission of information.

“You can see a range of work – from younger artists, to artists doing their PhD, who are maybe taking it more seriously as an artistic practice”, Kasumovic said.

According to Kasumovic, this is the only show where all artists from Western come together and give the public a glimpse of their hard work.

Yet, it’s only the second time this has happened.

“At first, there was a little resistance from the faculty. They didn’t think people would be interested enough to come down to Western,” Kasumovic said.

“We had people coming in all the way from Toronto to see the Open House. This changed the faculty’s opinion on how long people are willing to travel in order to see art.”

The Open House was so successful last year, that the artists have raised enough money to provide a free round trip shuttle service from Toronto for this year’s event.

The programs held different bake sales, and opened a pop-up cafe to raise money to fund the event, Kasumovic said.

The Arts and Humanities Council also helped with funding. As for a theme, Kasumovic says that celebration is in the air.

The Open Studio event is running all day, starting at 1 p.m., and ending at midnight with an after party. Admission is free, and everyone is welcome to stop by for the free food and great art.