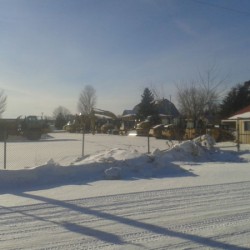 Anyone heading to Muskoka this summer looking to get away from the noise of the city might be in for a surprise.

Two of Ontario’s largest music festivals are set to debut near cottage country this summer, and local residents aren’t happy.

Boots and Hearts, North America’s second-largest country music festival, is moving from Clarington, Ont. to Oro-Medonte, a township halfway between Barrie and Orillia.  Joining Boots and Hearts is the inaugural WayHome Music and Arts Festival, set to be Ontario’s largest indie-rock event.  Both take place at the recently expanded 700-acre Burl’s Creek Event Centre.  With expected attendance of 75,000 people between the two fests, Oro-Medonte citizens are already seeing the effects.

“We’re feeling the rumble of the excavating equipment,” says local resident Ann Honeywood.  “It’s gone from a rural environment, where you could literally hear wolves at night, to a constant barrage of heavy equipment.”

Honeywood is also a member of “Save Oro,” a group devoted to informing residents of “the proposed irreversible changes to (the) quiet rural lifestyle,” according to its website.  But the concerts are only a few weekends during the summer, say supporters of the new concerts in online forums.  And they ask:  What, exactly, is irreversible?

The township’s small, rural identity will be lost, says Honeywood.

Oro-Medonte was so small that, until recently, it centered on a three-way stop.  The 20,000-person township will triple in size for Boots and Hearts, with 75 per cent of festivalgoers coming from cities west of Oro-Medonte, according to the concert promoter’s 2014 projections.  With all attendees showing up and leaving the grounds at the same time, combined  with the usual  heavy summer cottage traffic, Honeywood says congestion will be a nightmare.

A drone’s view of Boots and Hearts 2014 in Clarington, Ont.

The solution is more roads.  But that comes at a cost, says Honeywood.

“This is class-one farmland … and they’re putting gravel roads over the farmland,” she  says. ” We’re concerned about changing a rural community into something where we may never go back.  Once these concerts start, it sets a precedent and it keeps going.”

But the festivals’ promoter, Republic Live based in Peterborough, says ease of access was one of the draws of Oro-Medonte, and one of many important factors in arranging the festival.  Republic Live says the town will benefit substantially from the concerts, which are projected to generate $17 million.

“That’s a great thing for the region to be bringing in those kind of numbers,” says Republic Live representative Laura Kennedy. “We have a lot of community partners that we work with.  When you look at our track record, over the last three years for Boots and Hearts alone, we’ve donated over $60,000 between cash donations and ticket donations for charities to help with the fundraising effort,” she says. “That’s all funds that we’ve earmarked locally for the community.”

But just how does a small community change with the introduction of a big festival? One place to look is the Bonnaroo Music and Arts Festival, one of North America’s largest, and hosted by the same company as Boots and Hearts and Wayhome.

Bonnaroo takes place on 700 acres of former farmland in Manchester, Tennesee, a town with a population of just under 10,000.  For one weekend a year, Manchester turns into the sixth-largest city in the state, expanding by nearly 10 times its normal population.  All those people need access to the grounds, and Manchester residents went through battles similar to Oro-Medonte.

But Manchester is also a model for Oro-Medonte’s potential economic benefits.  Bonaroo generates $50 million for the city and state, with attendees spending an average of $28 per day outside the town, and $35 in the town, but outside of the festival.

All that spending has led to an increase in business and infrastructure, with a population increase of about 21 per cent since the first Bonnaroo in 2002.  If Oro-Medonte has a similar growth, it should expect 4,000 new residents.

Oro-Medonte, however, does not have the restaurants or hotels that Manchester has.  Those looking to spend money outside of the festival will have to go to nearby places such as Barrie or Orillia, says Honeywood.

“We’re a little country village,” she says.  “In our area, we have a general store.  That’s about it.” 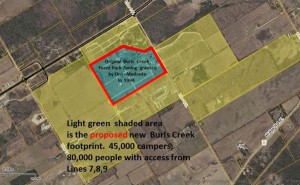 And with expected attendance numbers similar to Bonaroo spread over the two weekends, Oro-Medonte will either have to build up new businesses, or risk losing that revenue to surrounding cities.

Still, with all the changes looming in the township, Honeywood says Save Oro’s mission is not to get the concert cancelled entirely.

“We just want our lifestyle to be respected,” says Honeywood.  “These people do not live in the community.  They’re coming in as visitors and we want respect.  Do we want the concerts cancelled? No.  But we want the venue tamed.”

A meeting between the promoters and Oro-Medonte residents is scheduled for later in March, when Honeywood hopes to get a better understanding of the festivals’ future in the township.

“We’re not a bunch of prudes saying people shouldn’t have a good time,” she continues. “But this is our community that’s been rural, and that’s the way we like it.”