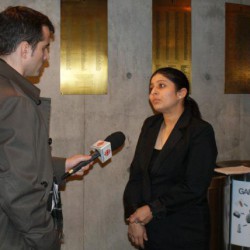 By Mekhala Gunaratne on February 26, 2013 in Community

Mattoo recently revealed findings from the survey on forced marriage to a crowd of 200 people at a conference on modern-day slavery at a Toronto YMCA. Until now, little evidence of forced marriages in Canada has been documented. The survey, conducted between November 2010 and January 2012, has changed that.

“Why are we talking about forced marriages at an anti-slavery conference?” Mattoo asked.

Because forced marriage is a form of contemporary slavery, she said.

“It’s a form of violence which can happen to women where they are married without their consent. They are being coerced into it, forced into it, sometimes manipulated into it, but at any point they are not freely getting into these relationships,” said Mattoo. “It can happen to men and women of all ages from all kinds of cultural and religious backgrounds.”

Of the 219 respondents surveyed, 43 per cent were forced into a marriage while living in Canada. This challenges the commonly held belief that forced marriages only occur internationally, Mattoo said.

Poverty, says Mattoo, is a risk factor for forced marriage because it increases someone’s vulnerability to manipulation and restricts access to resources. The survey found that almost 45 per cent of individuals in forced marriages had no source of income while a little more than 15 per cent earned less than $10,000.

Heather MacIntosh, program director of Democratic Development and Human Rights at the Chumir Ethics Foundation, said Canadian victims of forced marriage can sometimes be tricked into it by their own family.

In situations like this, Mattoo said victims are left with little choice and may appease the perpetrators.

“Clients who are taken abroad [may] never come back until they have three kids, and then they come back and they have no strength left in them to fight about what happened to them,” she said.

Mattoo hopes these survey results will encourage the public and government to recognize and respond to cases of forced marriage that occur both domestically and internationally.

“It is a complex issue we have identified clearly and Canada has not done anything about it so far. I do recognize that there are people out there who are doing amazing work and trying to serve clients with the resources they have,” she said.

“But I also know while working with these clients that there are hundreds of clients who do not get service,” she said.