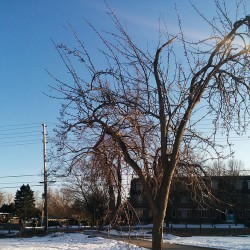 It’s a pretty safe bet that most Londoners don’t pick their fruit directly from a tree.

“London used to be covered in orchards,” said Harvey, who has started several community gardens over the years. “Fruit trees used to be a part of the scenery.”

Not so much these days, he said. Although there are community gardens in London, most of them are filled with vegetables, not long-lived fruit trees.

Rutten presented her case to the Trees and Forests Advisory Committee last Wednesday, and the TFAC has added it to its Urban Forest Strategy. Her suggestion that the city support local food tree initiatives will be voted on by city council later in the spring. It’s a small step, but a crucial one. Without city support, it is difficult for local organizations to plant and manage enough trees, simply due to lack of funding.

Rutten wants to see the city make it easy for people to plant communal food-producing plants that will, with the proper care, be around for a long time. These could include apple trees, cherry trees, peach trees, pear trees, hazelnut trees, raspberries, strawberries and other edible plants.

“Once you plant them, they’re there,” she said.

Rutten hopes this long-term community food supply will supplement the overburdened food bank while introducing the community to some healthier options. She isn’t too worried about the quality of the food itself. According to a 2011 report released by Toronto Public Health, fruit trees do just fine in soil contaminated by landfills and they can deal with a whole host of other potential concerns as well. Rutten also believes that an increased number of fruit trees will help people reconnect with their food.

“People are forgetting what food really looks like and where it really comes from,” she said. “This will help them remember.”

Hidden Harvest is an Ottawa-based organization that aims to promote the use of community gardens and fruit trees.
Screenshot photo by Clark Teeple

During the TFAC meeting, Rutten brought to the attention of the committee an initiative in Ottawa called Hidden Harvest, which aims to put all of the wasted natural food sources in the city, nearly 4,000 trees by their count, to good use.

In London, though, the issue is that these food sources do not yet exist.

Harvey recalls a time when fruit trees and other natural food sources were abundant, but he says those days are long gone.

“Where you do you see hazelnuts anymore? They used to grow along the railroad down by Pond Mills, but not anymore.”

Although their efforts are in the early stages, Harvey and Rutten, along with Community Gardens London, Food Not Lawns, and other local groups, hope to see fruit trees growing again soon.