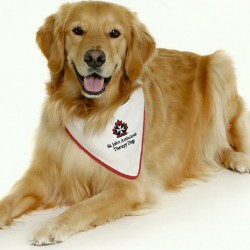 When Jade puts on her scarf, she begins to wag her tail. She knows she’s about to visit someone and brighten their day.

“Jade is all about the people.”

While this may not be a surprising temperament for a golden retriever, Jade’s friendly personality is very important. Jade is a therapy dog.

Therapy dog programs have been gaining momentum in recent months after several Canadian universities brought in dogs during exam time.

Students can relieve their stress and forget about exams by playing with the dogs.

“It just allows them to escape for that bit of time.”

The London therapy dog program was started in 1992, Power said, and currently has 60 volunteers and 54 dogs, including Jade and her owner, Hauser.

Power said the London program has been visiting Western University for years. The first visit was to the music department. A volunteer who had been a music student noticed that students waiting for the practical exams were very nervous. She thought bringing the dogs in would offer some distraction.

Though university visits have been getting the most attention recently, Power said the volunteers go to “any kind of setting where we allow the dogs to interact with the sick, the elderly and the isolated.”

Often people are drawn to dogs that resemble a family pet, Power said, but sometimes it’s just the physical contact with the animals that cheer them up.

Golden retrievers like Jade are the most common therapy dogs according to Power, but other breeds are just as suitable.

“I’ve seen great therapy dogs in all kinds of breeds, some of which you would never expect,” she said, adding that the London program has a 210-pound St. Bernard and several German shepherds. In the past, they have even had Rottweilers and Dobermans, although banned breeds like pit bulls are not accepted.

The therapy dog program doesn’t involve any specific training for the animals, but dogs have to pass an obedience test to become volunteers. Power said it’s up to the owner to prepare the dog for the test.

The dogs have to be comfortable around people, and the test exposes them to different social situations they might encounter on visits, Power said. If they show any signs of aggression during the test or while they’re volunteering, they’re no longer allowed to be part of the program.

Hauser, who is also the assistant coordinator for the London program, said the two-hour long test, which involves about 12 different scenarios and a compatibility test with other dogs, can be quite stressful for both the dog and the owner.

“You want the dog to do well obviously, and you don’t want any problems,” she said. “Not every dog is suited to be a volunteer.”

She said unfamiliar objects, like equipment found in nursing homes, might scare an otherwise calm and obedient dog, or the dog might not react well to a person with Alzheimer’s behaviours.

Dogs have to “show a balance of not being afraid and not being excited,” she said, while “the handler has to show that they have complete control over the dog.”

Jade and Hauser have been volunteers for four and a half years, visiting detention centres for young offenders, nursing homes and schools. Jade has passed a test that allows her to visit children 12-years-old and under. Hauser said she and Jade volunteer at least once or twice a week.

“The people that are affected the most, that we bring the most joy to on a regular basis would be the elderly at the nursing homes that feel isolated,” Hauser said.

They visit an elderly woman at the Chelsea Park Retirement Home who has no family and only receives visits from a friend every six months.

“She loves dogs, so we know we’re helping her every time we go,” Hauser said.

Another woman they visit has no family in London and struggles with a lot of pain from arthritis.

Despite the many diverse places she and Jade visit, Hauser noted the growing popularity of university visits.

She and Jade visited Western 18 times in November and December and have already booked eight visits for the spring exam period.

“We’ve never had bookings this early,” she said.

But when Hauser dresses Jade up in her St. John’s Ambulance scarf and takes her on visits, it’s not just the people who benefit, she said.

“When we’re visiting, it’s very good therapy for her,” Hauser said about Jade. “This is what she wants to do—she wants to be around people and make that social contact.”