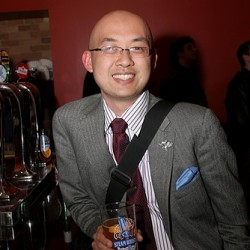 Ron Nurwisah has seen it all.

The social media editor at Huffington Post has been hit with everything from media scrums to G20 riots in his quest to cover Toronto, Canada and the world’s breaking news. But not all from the safety of his desk.

Nurwisah comes into work all smiles with stories and opinions no today’s breaking news. The well-dressed, tall man dons a pair of Buddy Holly-type glasses that rest on his bald head. He jokes for a few minutes, but once he sits down at his desk, you won’t hear a peep. For the next few hours, he’ll be studying the online world to find what will be the next headline.

But Nurwisah wasn’t born knowing that anything online related would be a hit. He started his journalism career at the student press at the University of British Columbia about a decade ago, working as the editor of their student paper. From there, he freelanced a bit before moving to the National Post in Toronto, where he worked for four years. This is where he began to notice not just the importance of online journalism, but social media.

“We all realized that Facebook and Twitter were going to be really important, especially Facebook. They were an interesting source of traffic for us. We didn’t realize how important until I left and came to the Huffington Post,” he said.

When the Huffington Post opened in Canada, Nurwisah was one of the first editors they hired to get the site running, and online was the only focus they had. He filled the site with stories, managed the front page and posted for social media. But a year into his job, Huffington Post hired him to be their social media editor on a full-time basis. A role he’s stayed with for four years.

Nurwisah noticed a transition in the newsroom. Where social media used to account for 10 to 15 per cent of their traffic, it now was at about 40 per cent. He saw that people gathered their day to day news from sites like Facebook and Twitter. And not just when they got home after work, but all day, everyday.

When Nurwisah arrives at the Huffington Post each morning, there’s only a few minutes of routine. h=He checks to see what’s bubbled up over night and to see what readers liked, and what they didn’t. But from there, he doesn’t know what to expect. He works on training to teach employees about best practices for using social media, and what projects he should be developing, such as Instagram which is focuses a lot of attention on right now. But if something happens, all his attention goes to covering that story. And nothing beats seeing when a story has been successful.

“It’s great to connect with people all over the world…I still get so impressed whenever I see that,” he said. “You can see commenters that are bad, but also some that are great. And you’re proud that you started that conversation.”

But working in an online newsroom comes with a long list of challenges. Because online journalism is a rolling deadline, when a big story breaks there can be no rest for Nurwisah and his team. His biggest challenge was the G20 summit, where not only were there stories to consider, but also the safety of his team as well.

“The G20 was hard because there were journalists that were being hurt…[and] harassed by police. They’re your friends and colleagues and it’s worrying when that happens,” he said.

The coverage of these issues can last for days, what Nurwisah calls “marathon sessions.” This is where day after day you know there’s news, and it’s exhausting but necessary to get the story out there.

But that’s why Nurwisah knows to take care of himself if he’s going to make sure the quality of his online journalism remains high. He recommends that journalists put their phone down and disconnect from the news, and not just after marathon sessions. Nurwisah gives himself a break on weekends, and tries to take trips so he’s no longer connected to the violence and drama of the newsroom. It’s easy to be sucked into rolling news and constant deadlines and worrying how traffic is doing, but it’s necessary to take a break and keep yourself sane.

“I’m no longer tethered to my phone. Put the phone away and enjoy life. I do that now.”

But despite the exhaustion and stress, Nurwisah is excited to see where social media and online journalism will go in the future Even now, he feels it’s becoming something that everyone needs.

“Online will be like water, like air. You’ll drink it all the time and you’ll breathe it until there’s no online journalism any more. It’ll just be journalism,” he said. “And I think that day will come very soon.”

Amy Legate-Wolfe is a masters of arts in journalism student at Western University. She has been published by Huffington Post Canada, the London Free Press and magazine publications covering everything from health policy to, of course, pigs. Follow her on Twitter @amylegatewolfe
View all posts by Amy Legate-Wolfe →
From the ring to the web
From TV to Toronto: the multimedia career of Katrina Clarke