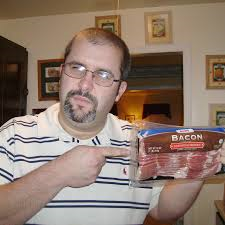 With the world of professional wrestling in the peak of its internet presence, how can one person set themselves aside as an authority on the subject?

Tom Holzerman – 33 – keeps his followers updated on the latest news, backstage information and matches. The husband and father wears glasses and fashions a brown goatee. He has been writing about the wrestling industry for six years, but has been a life-long fan.

“I have always liked writing my thoughts, and I have been a huge wrestling fan for forever,” he said.

But what separates Holzerman from the rest of the bloggers is his attention to detail and accuracy when gathering information. When breaking big stories like the recent in-ring death of a pro-wrestler in Mexico that involved the famous Rey Mysterio Jr, Holzerman was sure to do his homework and cite his sources.

“If there is no source mentioned anywhere in an article there is a very good chance what you’re reading is not true,” he said.

Even when it comes to breaking smaller, less impactful news, he always double-checks sources. Holzerman says that that this is the only way to gain the trust of his thousands of readers.

“If you make a mistake, readers can go anywhere else to find the accurate information,” he said

He gets this information from podcasts, credible wrestling authors and websites to cover a wide variety of topics.  “I cover lots of things in wrestling – results, previews, reviews, opinion pieces, ‘hot takes’ and a weekly mailbag.”

Weekly mailbag is an opportunity to communicate with followers, and have conversations about the latest news inside and out of the ring. This is a relationship that he nurtures, and takes very seriously on Facebook, Twitter and on his website The Wrestling Blog.

“I try to interact with people as if they were people. I tend to shut out people who are obvious sick trolls though. Why argue with people online over what version of an opinion is “right?”.  Social media really doesn’t have any drawbacks. It makes it easier to get links out and to get people who might like what I have to say a chance to look at it.”

One follower who regularly interacts with Holzerman through social media is Lukas Marcoccia. He respects Holzerman for his attention to detail.

“You can tell that he spends a lot of time watching the product,” he said.

And Marcoccia doesn’t always agree with the opinion pieces.

“One recent review he was extremely critical of a John Cena and Bad News Barret match in England. He said the match was mundane. Sure a few spots could have been different, but I watched the match myself and I liked it.”

Holzerman says that aside from the daily news, his opinion columns are his favorite and generate the most conversation with followers. This allows his own voice to come through in his writing which may get controversial.

“Why just write what everyone else is going to write? A writer needs to give his or her personality to these pieces.”

In anticipation of a Wrestlemania, Holzerman wrote a tongue in cheek article about the boring line-up for the event entitled: Guide to Surviving Wrestlemania 31.

Surprisingly, this was the highest grossing Wrestlemania –the super bowl of pro wrestling – in history.  The event that generated over 12.6 million dollars and broke the attendance record for Levis Stadium was covered by many sports and business media outlets.

A day after this very successful event, the stock price of WWE plummeted, prompting a very interesting business story. Although the business side is not his favourite topic to cover, he said that it is an important part of the industry.

“The financial side of the industry bores me to absolute tears. But, everyone else seems to write about it, whether they know a damn thing about it or not.”

Sometimes pro-wrestling news spills into other areas of interest such as the murder-suicide involving Chris Benoit in 2008. The widely publicized event drew attention to the mental health, and drug use of the very secretive pro wrestling business.

A lot has changed since 2008. Holzerman says that now, there is a lot more openness about the industry, in part fuelled by the internet.

“Ten years ago, all you really had were the dirtsheets and maybe some dude like Scott Keith riffing on shows like he was Mike Nelson or Joel Hodgson. Now, you have a lot more diverse community of writers that mirrors how sports are being covered. But you don’t just have sports reporters or sports business dudes, but people who write op-eds or who look at social trends.”

Holzerman keeps track of the quickly changing trends by staying in tune with the online world. “I follow enough people on Twitter to know what’s going on,” he said.  “It’s all about keeping your eyes open.”

When he is not at work, or spending time with family, he is looking for new story ideas and writing them.

“I get up and go to my real job and find breaks between the action to write. Then I go home to my family, and write in between that action.”

He spends all this time on wrestling because of his passion for it.

“Wrestling is the perfect combination of sport and art, and it has so many layers. It’s violent and beautiful, tense and funny. Pro wrestling can be anything, and at its best, it is everything. That’s why I love it.”

View all posts by Dane Wanniarachige →
A day in the life of Jesse Tahirali
From Print to Posts, Online is Now