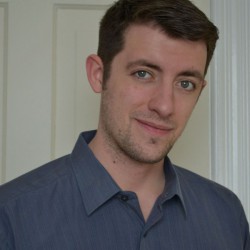 When Josh Elliott gets into work – there are only four people at their desks. Elliott, 27, is a writer for CTVNews.ca and his shift starts at 7 a.m.

“It’s not easy, but I deal with it,” Elliott said.

When Elliott graduated from the master’s of journalism program at Western University in 2014, he was unsure of where he would end up.

But after being recommended for a job at CTVNews.ca, the tall Bradford-native found himself working the morning shift, five times a week.

“The morning is more exciting. It’s worth getting up early for it,” Elliott said. “That’s when everything happens. All the political announcements, and a lot of stories break during the morning. So you get to do the big stuff.”

When Elliott arrives at his desk, he gets started on his first assignment – turning a TV story from the night before into a web story.

“The aim is to get this done within the first hour, so that it can go out with the newsletter that we send out,” Elliott said.

After this, the CTVNews.ca team meets for their daily 8 a.m. meeting. This is where Elliott and the other journalists go over stories for the day and pitch ideas.

One of Elliott’s favourite stories that he’s pitched was about Taylor Swift trying to trademark different phrases from her songs.

“Because we’re a website – you’re not just going to do hard news, you’re going to do fun things as well. It’s not like it takes up a lot of space on the web,” Elliot said.

He explains that these stories are good in order to keep traffic flowing on the site.  He adds that this is also a good story to promote on Twitter.

“I use social media a lot to gather information and things for my stories. I’ll only promote a story if I liked it,” Elliott explained with a laugh.

Elliott uses Twitter to look for sources as well. One of the stories hit close to home, it was about a student at Western who had passed away.

“I was assigned to cover the story. So I reached out to his friends on Twitter and talked to a few of them. I also got some reactions from Twitter, which I ended up using as well,” Elliott said.

Although Elliott has to write some emotional stories, sometimes he gets assigned quirky topics.

So, he put his journalistic skills to use.

“We couldn’t find out who she was at first. But then I found a guy on Reddit who said the girl went to his high school. So I contacted him, and he gave me her name. But she had taken down all her social media. But she had her MySpace of when she was 15. So I found the 15-year-old version of this 22-year-old who was making webcam porn in a library,” Elliott explained. “So then I passed on her name – and we got Windsor CTV going to her house, because I found her address. So then she ended up turning herself in later.”

In this case, the journalist used social media to find a source, and he also helped the police find the woman responsible.

Although Elliott says school has helped prepare him for the real world, he says that the newsroom is much more fast-paced.

“I use more social media now – and I also turn around stories way quicker. There’s not a lot of time to waste in the newsroom. You usually end up writing three to five stories a day. During school, you would only have to write one,” Elliott said.

Nida Siddiqui is the Digital Media Coordinator at Western, and helped Josh and his classmates during the program.

“Josh would tweet about stories he was working on, he’d blog about them, and he would also experiment with creating graphics for his stories. I had no doubt that he would be a great multimedia journalist so it doesn’t surprise me that he’s doing well now at CTV,” Siddiqui said.

Elliott hopes to continue working at CTV. And he knows that he’s got to be ready for anything when he comes into work.

“You never know what’s going to happen. There’s free coffee, which is good, because you got to keep your energy up all day.”

View all posts by Rima Hamadi →
Going Your Own Way: A Day in the life of Andrew Donovan
When the levee breaks, go with the flow