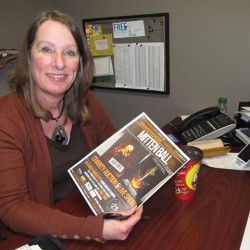 By Kaanayo Nwachukwu on February 26, 2013 in Community

Shari Fulmer recalls her husband, Steve, coming home on a cold winter day four years ago to tell her a homeless teen walked up to him at a beer store, begging for a pair of mittens.

“He was so upset about it and it affected me,” said Fulmer, a real estate broker in London, who raises funds for homeless teens in her spare time. “He said we have to be carrying a box of mittens in the car.”

To help bring warmth to homeless teens, Fulmer (pictured above) is organizing a fundraising charity event at the Marconi Club at 120 Clarke Rd., on Saturday, March 9, from 7 p.m. to 1 a.m.

“Homelessness is a huge concern in our society,” she added. “Being homeless in Canada in the winter is dangerous because of the temperature. I know because I sell homes.”

Organizers are also planning a live and silent auction of artwork, adventures and everything in between.

The event has no lack of in-kind and cash sponsors, Fulmer said.

“It is all covered,” she added. “All our auction sales – live and silent, venue, professional auctioneers and registrants are all donated by local businesses and volunteers.”

“All proceeds will go to Keeping Kids Warm,” Fulmer said. “The organization will use the money to raise awareness about homeless kids. We don’t see them but they are there.”

A couple of years after her husband had that encounter with the homeless teen, Fulmer was looking for a local charity to support when she came across the organization, she said.

Donna Atkinson-Wilson, the founder and co-ordinator of Keeping Kids Warm, a London-based charity, said she’s thankful for what Fulmer is doing. She’s working with Fulmer to ensure the fundraising event goes off without a hitch and that its objectives are realized.

Atkinson-Wilson, a grandmother of five children, wants other people to emulate Fulmer’s kind gesture because homeless teens need love and care like anyone else.

“Homeless teenagers are everywhere,” she said. “You just have to look to see.”

It’s sad to see homeless children in Canada, one of the world’s wealthiest nations, Atkinson-Wilson added.

“Some of them are gays and lesbians and their parents kicked them out rather than try to understand them. I don’t think that children at any age should be kicked out.”

The Mitten Ball fundraising event will coincide with the 10th anniversary of the founding of Keeping Kids Warm.

Atkinson-Wilson started the organization in her home after a period of depression, following her mom’s death at age 50 in 2002.

In its 10-year existence, Keeping Kids Warm has given more than 16,000 knitted items to homeless kids.

“Seeing homeless children wear some of the items we donated to them makes me feel good,” Atkinson-Wilson said.

It’s the good work Atkinson-Wilson and her organization are doing that galvanized Fulmer into action to organize the Mitten Ball.

“At a lot of organizations that help the homeless, the teenagers are left out because they are yet to be 18, they are invisible and don’t feel safe,” Fulmer said. “I thank Donna for watching out for them.”

Fulmer has been planning this event since August of 2012. She believes Keeping Kids Warm can do more for homeless teenagers if it has the resources.