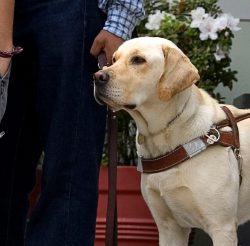 With finals looming, a London community program is continuing to provide stress relief to students by bringing their lovable four-legged friends to campus.

From 12 to 1:30 p.m. today in the University Community Center, St. John’s Ambulance’s Therapy Dogs will be available to all students for fun, fetch and cuddling. The reason, students stressing over finals!

St. John’s Ambulance’s Therapy Dogs program originally started in 1992 with the mandate to ‘provide social interaction to the sick, the elderly and the isolated.’ As such, originally the program visited primarily hospitals and nursing homes.

Over the years, as mental health awareness increased and the negative impacts of stress on student performance and health became more obvious, the program moved into campuses across the country. They have been visiting Western University for 12 years and in 2014 alone they made 43 separate stops on campus.

Terry Power has been the volunteer coordinator of the Therapy Dogs program since January of 2008 and she says that the dogs are greatly beneficial to students during high stress times such as finals and midterms.

“It’s an escape, students are under a lot of stress with exams and it gives them that period of time when they can escape from that and relax,” she said.

While they aim to allow students to decompress with the dogs in advance of their exams, Power said that sometimes the visits come immediately prior. This doesn’t stop some students from spending the time just before a test with the dogs rather than cramming, however, to their benefit.

“The students who have made the choice to come and visit with the dogs say that was the best choice they could have made,” she said. “That hour of relaxing is a big benefit.”

The benefit of these visits isn’t just a one way street either, and Power says that the dogs get a great deal from it too. A visit to the university is much more animated and interactive than their usual visits to hospitals, nursing homes, etc. and they get a great deal of enjoyment out of visiting with students.

“The dogs that come out of the university love the visits,” Power said. “They really thrive on all of the hands reaching in to touch them.”

The dogs themselves receive no specific training through St. John’s Ambulance but they are evaluated along a specific set of guidelines to make sure they are the right fit for the program. While failure is rare, Power says, it does happen.

Power says that any breed of dog can make for a great therapy animal, Golden Retrievers are especially adept at it due to their goofy and loving demeanor. Of the 82 therapy dog teams (the volunteer and the dog) roughly a quarter are Golden Retrievers.

The benefits of these campus visits also extend to the program itself, as students who benefited from the stress relief often become the next wave of volunteers for St. John’s Ambulance.

“A number of times in the last few years when I’ve been asked to go visit a new program in the community, it’ll be someone who graduated from Western and had these de-stress visits while they were there,” Power said. “There’s benefits for all of us.”

View all posts by Eric Green →
Facebook: a substitute for personal service
“Run Like a Girl” Campaign seeks to empower women