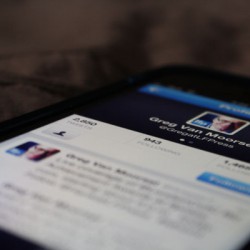 They are short thoughts – 140-character messages shared with anyone who decides to follow you. These tweets, brief as they may be, are making their way into the political arena.

Recently, Londoners have seen local issues take precedence on the social media platform – with the city’s tax increase and a councillor’s derogatory comments at a council meeting generating a lot of discussion amongst Twitter users.

But how much meaning can these short messages carry?

“It has a pretty powerful impact on local politics and politics at all levels,” said Kate Graham (@KateMarieGraham), a political science PhD candidate at Western University and manager of corporate initiatives in the London city manager’s office. “Things like Occupy and other global movements would never have happened before social media. It changes the relationship between citizen and government in a very significant way.”

However, the role of citizens using Twitter differs from that of politicians using it as a communication platform.

“Before social media, if you wanted to get in touch with your councillor or your mayor about an issue, you might have to go and arrange a meeting or send a letter. This way you can engage with them instantly and it’s very public,” Graham said.

Twitter offers a forum for discussion. It has a group effect in which a tweet to a local councillor might interest others which then generates a larger conversation on the issues, she said.

Such was the case earlier in March when news outlets like the Huffington Post tweeted out: “Ontario city councillor drops N-bomb.”

“It’s a kind of phenomena that didn’t exist before social media,” Graham said. Kate Graham is a political science PhD student and manager of corporate initiatives with the City of London.
Photo by Andrew Forbes.

The politicians, on the other hand, are allowing potential voters to get a glimpse into their lives – connecting with their followers on a personal level. “Justin [Trudeau] is the first Canadian politician who’s really shown that social media has a pretty profound impact. He’s been able to get new members for the Liberal party. It’ll be interesting to see if all of those people actually turn out and vote, but if they do I think it will demonstrate that social media builds a relationship that didn’t exist before,” Graham said.

“People that interact with him on Twitter, I think, feel like they know him. He posts pictures of wherever he is around the country and some of him with his kids. It’s like you’re talking to a friend rather than a politician. It breaks down the formality that used to exist there.”

But not all politicians run their own accounts. Some designate members of their staff to read, respond and tweet on their behalf.

“Just like if you send an email to one of them or you wrote them a letter – the response you’re going to get is unlikely to come from them,” said Greg Van Moorsel (@GregatLFPress), a local news editor for the London Free Press (@LFPress). “I think savvy social media users know that.”

Like many others, he’s not convinced that social media is an important tool for politicians.

“There’s a danger in over-emphasizing how meaningful tweets are. It might be a way to extend your profile and get your name out there, but I’m not persuaded that it is the way to hail a vote,” Van Moorsel said.

Twitter can’t help voters feel that sense of physical presence.  But the social media platform does engage the public – which is important in bringing issues forward and putting them on the public agenda.

“A recent study I’ve read of Canadian elections is of the 2011 federal election where Twitter was shown to be prominent in terms of generating discussion. It created a space where new issues would rise higher on the policy agenda than others did because of what was generating enough community attention that it became a topic of frequent discussion,” Graham said.

But will Twitter ever play a bigger role in political elections than just a communication platform for politicians and a discussion board for citizens?

Studies of the 2008 American elections show that Barack Obama wouldn’t have won the election if it hadn’t been for his effective use of social media, Graham said.

“We’ve never seen a result of an election be determined by social media in Canada the way that we have in the States,” she said. “But maybe it will happen in the next federal election with Justin [Trudeau]. We’ll have to wait and see.”