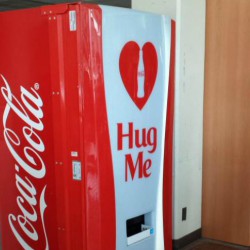 It was there for only a day.

A vending machine that reciprocates when you give it a hug.

“I felt kind of foolish hugging a machine,” she said. “You hug it and you get a free Coke.”

Ng, 21, first heard about the machine Thursday through Western Hospitality Services’ Twitter account. She didn’t think much about it at first.

Then, heading to class at the UCC, she noticed students standing around the vending machine. Naturally, she stopped to give the machine a hug.

Ng explained that the machine had sensors. If you put your arms around the big red-and-white vending machine, a can of the fizzy beverage would come out.

But at times it didn’t work, said Ng.

“Sometimes people would do it for a really long time and nothing would come out,” she said.

“One girl hugged it and she got two Cokes,” said Ng. The vending machine is part of an interactive advertising campaign by Coca-Cola. Frank Miller, director of Hospitality Services, said the company approached the school.

“It was something that Coca-Cola wanted to do,” he said.

At first, Miller was hesitant to allow the vending machine on campus. He said Hospitality Services is “exceptionally concerned” with providing healthy food and drink choices for students.

“I’m always concerned about Coke as the big, bad brand,” said the director. “My mantra would be get water from the tap.”

Miller also had to think about safety issues. “I thought it was going to fall on somebody,” he said.

After talking to one of his colleagues, Miller changed his mind.

“I guess it’s a simple thing, during tough times, that makes people happy.”

“I was mesmerized watching 30 people hug a machine,” he said.

Ng echoed those sentiments. “Everybody seemed to be having a good time,” she said.

But did the marketing campaign work?

“I don’t normally drink Coke. But, if they’re giving it out for free, I will.”

Join the cancer fight
A quarter-pounder with cheese, hold the jersey