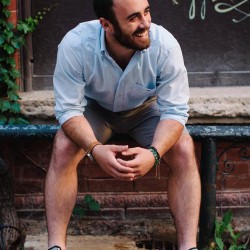 Standing at 5’ 7,” stocky, with his dark hair shaved and his beard cropped as close as I’ve ever seen it, Andrew Donovan may not strike everyone as intimidating.

However, as he waves me through the front door of his Guelph home, it’s evident from his presence, they way he subtly dominates the room, that he hasn’t lost his ability to neatly and subtly take charge of any situation he encounters. He’s dressed down, in gym shorts and a black tee, a shamrock pendant hanging around his neck, yet he doesn’t look uncomfortable, quite the contrary actually.

He grabs my hand in a reasonable, firm handshake: not so hard as to hurt, but not so soft as to be disappointing. He sees me looking quizzically at his face and smiles.

“We got engaged over Easter,” he says, motioning to his fiancée, Morgan, and rubbing his stubbly facial hair at the same time. “I didn’t exactly feel like asking her father his permission while looking like a caveman.”

This is wholly and entirely indicative of the man I came to know and respect while cutting my teeth at the University of Guelph’s Ontarion student newspaper: everything is done for a reason. I don’t mean that in the same way people do when they say ‘everything happens for a reason,” often used to rationalize some tragedy or unfortunate turn. Rather, Donovan has always insisted that every person is the master of their own destiny, able to alter their life course at any time through mindfulness and self-reflection.

This idea is one of the reasons for, and core tenants of his new endeavor: making a career for himself with his website, Intentful Gentleman.

“I think it speaks to my feelings on the structures of journalism that I used a made-up word in my title!” he said. “I just thought, ‘well, Shakespeare made up words all the time,’ right?”

Donovan doesn’t work at the Ontarion anymore. His career trajectory has changed slightly since his time there, during which he was convinced of his desire to be a career journalist working for a big media company.

At the moment, he works as a laborer in a factory to “keep the bank happy.” That’s all the breath he was willing to spend on the topic.

He said that while he’s decided he needs to take time to figure out his place in the world, the call of journalism is still strong.

“The defining moment that made me want to write actually happened [in my] last year of high school,” he said. “I was suspended for writing an article about the administration not telling the parents about a gun threat we had to the school.”

“I didn’t realize it at first but after it was published I really came to understand the power of provocative writing.”

After high school and four years as a student volunteer writer, Donovan was offered a paid editorial position with the paper, heading up the sports section. During this time he wrote for every section of the paper: news, sports, arts and culture, etc. Over time however, he said he came to dislike writing for other people. He felt his personal voice being muffled by the guidelines of the publication and, the more it was muffled, the louder it started to scream inside.

“It’s a different language they use. I understand why they use it, because they’re trying to appeal to a mass audience, but I just don’t speak it!” he said.

And so, after five years with the Ontarion, even having applied for jobs at publications in Guelph and Kitchener-Waterloo and getting positive feedback, Donovan decided to take his leave and figure out just what it was that he felt was missing from his professional life.

“I’d been writing for other people for so long, I didn’t even know what I sounded like anymore!”

Through Intentful Gentleman, which has been up and running online for a little over a year, Donovan said he hoped to engage with his audience and provide them more then just a play-by-play of the current events deemed worthy by the mainstream media. He says that competition for viewers leads to important stories being ignored.

“There’s more going on in the world than Gomeshi and Cosby, and not to say those aren’t important stories, but so often everything else just gets trampled and forgotten because everyone hones in so closely on the hot-topic issue of the week,” he said.

Donovan says he has found his audience, small but growing, very receptive to the way his site discusses issues. The main reason, he thinks, is that while the writers at Intentful Gentleman deliver the news, they add context and opinion to the pieces, allowing their readers to discuss and debate the issue.

“This let’s us take the readers into account and engage with them. Their input can actually shape the way we cover things,” he said. “That’s not something that happens at a mainstream publication.”

Morgan Fualds, Donovan’s fiancée, says that she has seen the positive impact his website has had on him in the months since he quit the paper.

“It allows him to continue with his real passion, writing…and he seems happier about getting 20 or 30 views online than he ever was at the paper,” she said.

“I know he doesn’t enjoy the factory but this gives him something to keep him going until we leave.

In a little over a week, the couple are leaving for Italy for at least 14 months while Faulds completes her Montessori certificate. Donovan couldn’t be happier, thinking that this experience abroad, completely out of his comfort zone, will bring him even closer to his goal.

“There is no growth without pushing new boundaries. It’s going to be a slow process, building this thing up, but I know from feedback…people want this, I’m not giving up on it,” he said.

While he is hopeful that Intentful Gentleman will one day make it big enough to pay the bills, he’s not worried if it doesn’t ever become a media empire. He said that he wouldn’t really want to be famous. All he really wants to do is to connect with his audience in a positive way, even if he doesn’t yet know the way.

“There’s no ambition for fame and glory in this. I feel that through my website…I’ve been pushed in this direction to help people, which is ironic because I don’t even know what I’m doing myself,” he said.

“My work seems to resonate with people. I don’t always know what I’m saying but [the readers] always seem to get it!’