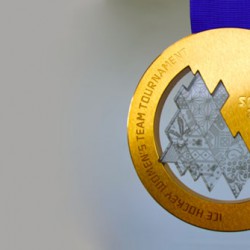 The crowd rises to their feet and the cheers that fill the arena become louder.

Jayna Hefford looks up to the scoreboard, a smile forms on her face as the clock ticks down.

When she looks back at that moment, she says, “It’s still sort of hard to believe.”

It all began for Hefford back in the summer of 2013. 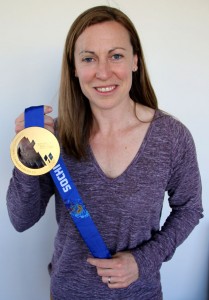 And on Oct. 26, 2013, the Canadian women’s national hockey team stepped on the ice to play its first game as a team, in preparation for the Sochi 2014 Winter Olympic Games.

“We are always excited to play games,” said Hefford, who has participated in every Winter Olympics since 1998. “We spend a lot of time training, so it is nice when we actually get to play.”

After summer boot camp, the team relocated from Penticton to Calgary. Because women were joining the team from across the country, Calgary was picked by the coaches as the most central for all 27 players. It also made it easy to drive to various locations to play their upcoming games.

Playing games is a different, more exciting, kind of training that the women look forward to, but it was their opponents – the 18 teams in the Alberta AAA midget hockey league – who almost couldn’t contain their excitement.

“This was my first time playing against the national team, and I can’t even begin to describe the feelings I experienced,” said Mason Younger, a 17-year-old defenceman on the Fort Saskatchewan Rangers. “It was crazy to actually compete and play with the people you looked up to and admired as a kid.”

But Hefford says the young men didn’t let their emotions get the best of them, at least in front of her team, until the games were over.

“It wasn’t until after the games that you kind of remember how sweet they all are,” said Hefford. “Some of them came up and asked for pictures and autographs.”

That’s because when the puck hit the ice, it was game time for both teams.

“Our pre-game talk obviously changed a bit, having to learn and remember the rules and regulations they play under. No body contact was a big factor to remove from our game,” said Younger. “We had to keep our mindset, and composure against the women and try not to get too overexcited.”

But for some of the players, this wasn’t new competition. The women’s national team has joined the AMHL for the past four Olympic years.

“I knew what to expect,” said Hefford, the 5-foot-5 forward. “They’re big, they’ve got such long reach, they’re strong, and so we have to be that much better and that much stronger and smarter because of that physical difference.”

“We are always trying to find that level of competition where every game is a game,” said Hefford. “To be up one goal or down one goal with a minute left is not something you can practice, and that’s what the league provides for our team.”

The buzzer sounds. The Olympic gold medal hockey game was going into overtime.

“There was a lot of excitement at that point,” recalled Hefford of how Canada had come back in the last few minutes against their American rivals. “We were focused. We knew that the momentum was on our side. We knew how to play 4-on-4, we practised it.”

Then with 11:50 on the clock in the game’s overtime, Canada shoots and scores for the last time in the Sochi Olympics.

“It was almost surreal,” said Hefford. “Looking back, it just felt like everything we did all season was worth it – the tough days, the hard days, the time away from family – it all paid off.”

Once the 2014 Sochi Olympics were over, Hefford couldn’t wait to get back to Canada, but only after a vacation in Puerto Rico with her family.

Hefford grew up in Kingston, Ont., and now lives in Toronto.

For the past 17 years, she has been running a girls’ hockey camp out of Kingston with her former Team Canada and Brampton Thunder teammate Lori Dupuis.

“We started the camp when there wasn’t much girls’ hockey in Kingston,” said Hefford, the University of Toronto alumni. “It’s a good way to give back to the community and be on the ice. It’s so great to see the growth of the women’s game.”

About 100 girls sign up per week for Hefford’s hockey school, and there are already a few camps filled up for the upcoming summer.

“We always say that if we can teach them one or two things in one week to make them better or smarter, than we’ve done our job,” said Dupuis, who played with Hefford on the Varsity Blues, Brampton Thunder, and the 1998 and 2002 Olympic teams.

“We work well together,” said Dupuis. “We both understand that we need to train and stuff so if she needs to one day, I can run the camp and vice versa.”

During Olympic years, the team is completely consumed in training and preparing for the games. But even during non-Olympic years, the players are still responsible for about 25 hours a week of hockey-related activities including skills work with national team players, weight-training, and games with their regional teams in the Canadian Women’s Hockey League. 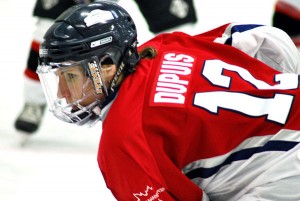 Lori Dupuis has played with Hefford on the Varsity Blues, Brampton Thunder and has won two Olympic medals on Team Canada.
Photo courtesy of Lori Dupuis

The CWHL is the highest level of women’s hockey in Canada behind the Olympics.

Hefford is the league’s all-time leading scorer with 252 goals and is the captain of the Brampton Thunder team.

“She is a great captain,” said Lori Loftus, a former Brampton Thunder teammate and coach. “She understands hockey so well. She leads by example of how she prepares and plays and when she speaks, teammates listen.”

There is one other factor that Loftus says has helped Hefford become so successful in her athletic career— including scoring the winning goal in the 2002 Winter Olympics gold medal game.

“No one works harder than Jayna. She brings a game-like intensity every single time she’s at the rink, practice included,” Loftus said. “It’s no surprise to anyone how well she’s done on the international stage.”

With five Olympic medals, four gold and one silver, Hefford is no stranger to the feeling of being the best in the world.

“This year we were underdogs, we weren’t expected to win,” she said. “In Torino, we had a dominant performance (4-1 against Sweden in the final). We were the favourites in Vancouver… It’s a different feeling when you have control the whole game.”

There’s no doubt that Hefford will be back on the ice soon, but for now, she’s taking time off to relax and enjoy the fifth Olympic medal that she will hang on her wall.

“I’m going to take some time to enjoy [the Olympic win], it’s still surreal to me,” said Hefford. “Then I’ll start to decide my plans for next year.”