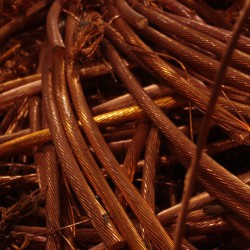 By Blair McBride on February 26, 2013 in Community

Two days before Robert Munroe took possession of his new house on Hyatt Avenue in London, it was robbed. The thieves broke in at night and made off with some valuable metal.

But they didn’t take gold bars or platinum coins. They took copper. “All the copper pipes had been stripped from the house. A gas pipe was removed from the furnace and the ground wire for the electrical panel had been cut,” said Munroe, a 67-year-old renovator.

Munroe was a victim of the common crime of metal theft. Thieves break into a house or industrial building, cut out the copper wiring or pipes and steal away into the night. They then sell their clunky loot to a scrap metal dealer.

The payoff can be lucrative if thieves are active. According to Shelley Szauter of the metal recycling company Core Industries Ltd., copper is priced by weight.  “You can bring us a hundred pounds of copper and get $300 from us in a night—which you could get out of a house,” she said.

Munroe guesses that the thieves didn’t get much for his copper. “For the pipes they took out they would be lucky to get a hundred bucks,” he said. “My lawyer said it wouldn’t be worth the trouble they took to steal them.”

Taking metal from a building is more complicated than lifting a gold watch from a dresser drawer. Thieves need tools—often heavy ones—to break into a building and remove the copper. They also need a bag to stash the metal in and usually a getaway vehicle, said Szauter.

Ripping out the copper is noisy and takes time, which would attract attention, right? But this is not the case because thieves usually hit unoccupied buildings, which diminishes the risk factor. “They cut the copper up into pretty small pieces and they shove it into duffel bags while they’re in the house,” said Szauter. “So it’s all kind of under cover of the house and in the middle of the night, so there’s not a lot of risk of getting caught because there’s nobody in there.”

There’s another reason it’s a relatively simple crime. Const. Ken Steeves, public relations officer with the London Police Service, explained that metal is hard to track: “It’s not as if it has a serial number where we can trace it back and say ‘this is where it came from or this is the owner or this is considered stolen property.’ It’s hard to determine when you see somebody with metal that the items were stolen.” Steeves added that he would have to go through every break and enter and theft incident involving copper to establish a trend.

And it’s not just copper. Any metal will do for some thieves. Just because your car is locked doesn’t mean it’s safe, said James Westelaken, a credit manager at London’s Airport Kia car dealership.

The dealership has about 100 vehicles on the lot. Over a two-month period last year, 45 vehicles were rendered useless after their catalytic convertors were cut out. The forearm-length devices act as exhaust filters. Westelaken said that one of these is worth $100 at a scrapyard.

“They come onto the lot with a little duffel bag or something, with a little battery pack sawzall (a small saw), lie down underneath the vehicles and cut the catalytics out,” explained Westelaken. “It’s the most expensive part that’s easily removed that way. You show up here, you take 15 of them – you just made 1500 bucks this evening. Not a bad paycheque.”

Since the thefts, Airport Kia is less attractive for thieves. Westelaken said they now store the catalytic convertors inside the building and install them when a car is sold.

A few hundred dollars worth of stolen metal is a minor nuisance, said those familiar with this crime. The losses aren’t severe. In Munroe’s case, he hired a plumber to replace his pipes with plastic ones.

But if a site – even a large and conspicuous one – isn’t secured, then people with a need for cash are likely watching it. And the losses can be huge.

Szauter explained that three years ago, a couple of men were coming in several times a day with farm equipment. “Vehicles, motor blocks, lots of heavy steel and heavy farm machinery,” she said. Core Industries paid them thousands of dollars for the items. “It turned out in the end that they were stealing all this material from a gentleman’s farm and the gentleman was in the hospital.”

Incidents like that are rare, but Szauter said that almost every week suspected thieves bring in metal to sell. Core’s main customers are electricians and plumbers who regularly work with metal, so Szauter said it isn’t hard to spot suspicious individuals.

“If someone comes in and they just look like some Joe on the street with a ball cap and running shoes on, and he’s got 200 pounds of copper wire and he doesn’t know what kind of wire it is, that to us is suspicious.”

It’s difficult to determine if metal theft incidents will continue at the same rate in London or if its prevalence might increase. As Steeves said, “Where there’s a way of making an easy dollar, some people do it.”