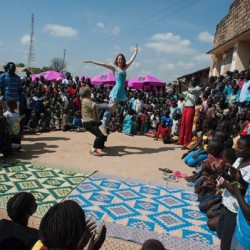 Tim Cunningham is currently under quarantine. Having just come back from working in an Ebola care centre in Sierra Leone, he’s adhering to New York City policy and serving a mandatory 21-day quarantine, imposed on health workers who return home and show no symptoms of the disease.

“I’ve got nothing but time,” he says with a chuckle.

Cunningham’s sense of humour is good natured and, in his line of work, a necessity. While he makes his living as an emergency nurse, Cunningham is also an executive director of Clowns Without Borders – the  volunteer-run organization that brings humour to children in war torn and dangerous areas of the world. Clowns Without Borders, or CWB, currently has offices in nine countries across the world, including a Canadian office in Quebec.

This organization is just one of many that brings to light the benefits of new, creative therapies in helping children and adults deal with trauma and tragedy.

Clowns Without Borders proves on a daily basis how powerful a sense of humour is. The volunteers travel to devastated destinations to put on shows across the globe, armed with nothing but a smile. Founded in 1993, the organization has provided psychological relief to people around the world, with projects in Lebanon, South Sudan, Columbia, the Philippines and Haiti in the last year alone. The group not only puts together shows for their audience but also hosts workshops on performance building and ways to share stories through the arts.

The University of Louisville offers workshops for clowns going abroad. Courtesy of Clowns Without Borders

Cunningham tells the story of one particular show he’ll always remember. While at a women’s shelter in Texas in 2005, Cunningham and his team of clowns chose a little girl from their audience to join them for part of the show. She was wildly engaged, all smiles and giddy enthusiasm. Once the show ended, the team was approached by the shelter caretakers, who were completely astounded. They revealed the young girl’s usual disposition: she never communicated, never made eye contact and never spoke. But during this one performance, she opened up.

“It’s hard to measure what we do,” says Cunningham, “but it’s magic. That’s what makes the work important. We’re just being present and we allow for healing.”

It’s easy to understand what Cunningham means when he describes the work he does as “magic.” Because of the levels of danger in some of the places they travel to, Clowns Without Borders partners up with other organizations, usually NGOs, at every location.

“We only go where we’re invited,” he said.

David Lichtenstein, president of the organization, was invited to Haiti just seven weeks after the earthquake that tore through the nation. Lichtenstein, who has worked with CWB for 15 years, went to several hospitals during that time.

“We went from room to room. Hugged a couple hundred kids, some of whom had new amputations. How could one not be affected by that? It wasn’t easy.”

Lichtenstein says the work he does has the ability to transcend any obstacles faced by typical aid workers, such as language. While traveling with CWB, the performers work with a local group to help them communicate with their hosts.

“But that’s the great thing about physical comedy. You don’t need words.” 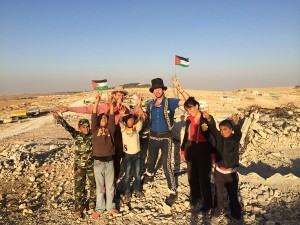 David Lichtenstien, left, in Palestine in 2013.
Photo courtesy of Clowns Without Borders

Lichtenstein says his organization is taken far more seriously internationally than in the United States. “Clowns have such a bad reputation here,” he says with a laugh, “no one takes what we do seriously, or as a real form of assistance to our audience.”

In fact, clowning has been used as an aid to traditional therapy treatments for some time. Independent therapeutic clowns work one-on-one with children in hospitals across Canada.

Just as the name suggests, these men and women with backgrounds in community theatre, professional clowning and psychology use comedic performances and games to help children going though both short-term and long-term recoveries.

“We don’t all wear the makeup and the baggy clothes,” says Ken Sperling, the therapeutic clown at London Health Sciences Centre (LHSC) in London, Ont. “We do keep the red noses though.”

Like Clowns Without Borders, these therapeutic clowns put on performances to cheer children up  when they’re injured or sick. However, the therapeutic clowns employed by hospitals across the country also build long-term relationships with these children and become an integral part of their recovery.

“I’ve had parents tell me that the only way they could get their kids to the hospital at all was to say ‘Ollie will be there,’” Sperling says, referring to his stage name. “It’s just so rewarding.”

But Sperling says his job is not all fun and games.

In his time working at LHSC, Sperling has had his share of emotional moments.

“I once had a friend come in, a friend I hadn’t seen for a long time,” he recalls, “only to find out his little girl had leukemia.”

“Another time, I had a child, a patient that I saw go through remission and be discharged from the hospital … But was killed in a car accident only a few weeks later.”

He pauses.“So, yes … we have our share of difficult moments.”

Although Sperling was able to recount these two difficult moments, he has been overwhelmed with the number of rewarding experiences his job presents to him. He’s quick to attest to how powerful something as simple as laughter can be.

“Anything that makes you happy makes you feel better.”