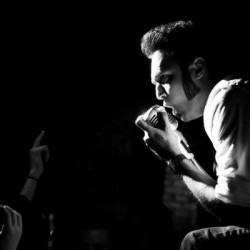 It’s a bitterly cold Saturday night, but inside the club Call the Office, the air is thick and warm as people pop in to hear the funk and soul sounds of Motown.

The Supremes’ Stop! In the Name of Love fills the room as a group of women break into the song’s signature dance moves.

The iconic music that came out of Detroit in the 1960s and ‘70s is being played for a 21st century crowd tonight. And they love it. This Motown revival night at Call the Office is just one of the many Motor City music nights that promoter Good Kids has put on in London over the past four years, said Steve Rock the creative director of the company.

“No one else was doing it, and I needed it to happen. There was a void.”

The demand for Motown-themed music nights has grown over the years and are they are now featured in eight major cities, including Paris and Tokyo, said Rock. Motown, he says, is still popular because the music is rooted in good feelings, sex, love and understanding.

“If someone doesn’t like Motown music the problem isn’t with the music, it’s with them,” he said.

There’s a reason why this music is played at weddings across multiple generations, said Rock. “It’s breadth of touch and influence is immeasurable.”

Andrew Flory is an expert on Motown who shares Rock’s sentiment. He has written about the phenomenon of Motown over the years, including his forthcoming book, Hear a Symphony: Listening to the Music of Motown.

Berry Gordy Jr., a songwriter in Detroit, founded Motown in 1959. Motown is responsible for launching the careers of many artists including The Supremes, Marvin Gaye, Stevie Wonder, The Temptations, The Jackson 5 and Michael Jackson, said Flory, an assistant professor of music at Carleton College in Northfield, Minn. “Michael Jackson might be one, if not the most important rhythm and blues musicians of the postwar era,” said Flory.

Jackson was a global success, one of Motown’s artists whose popularity has “seeped into the public culture around the world,” said Flory.

Motown has also become a style of dress and a style of dance moves, said Flory, who used The Supremes, Stop! In the Name of Love to illustrate his point.

“When three girls get up and put their hand up to the audience like Stop! In the Name of Love, everybody knows that’s The Supremes. It’s an iconic dance move,” he said. “People just know this music.”

The Supremes and their iconic dance moves. They had five No. 1 singles in a row, says Flory.

Flory said he could name music companies that were Motown’s contemporaries in the ‘60s and most people wouldn’t know who they are, or the artists they represented. But Motown’s iconic status has stood the test of time.

“Motown has a very successful legacy, it’s not going anywhere,” he said.

In fact, if anything, Motown’s sound has influenced some of today’s biggest neo-soul artists like Jill Scott, Raphael Saadiq and D’Angelo who just released a new album, said Flory.

At the corner of Toronto’s busy Yonge and Eglinton’s intersection is Vortex Records. Inside, stacks of used CDs and vinyl records line the walls. A record player spins tunes while a few customers search through the hundreds of albums on display.

Yukon Damov, 24, has been working at Vortex Records for about five years. He says vinyl Motown records rarely come in, but when they do, they sell quickly.

“They’re pretty popular. As far as soul music goes, they are definitely up there and soul music is popular with us,” he said. Yukon Damov says Motown albums by artists like Marvin Gaye and The Temptations are popular sellers at Vortex Records.
Photo by Selina Chignall

Damov said he didn’t grow up on Motown, but came to it through a friend’s brother who was sampling it for hip-hop beats. “Hip hop brought me back to an older sound that for me never feels really old or dated. It’s timeless, and that appeals to me.”

It also appeals to musician, Ajay Massey, 39, the vocalist and guitarist of the London-based band, Marcellus Wallace. “Motown was in the back of everything I heard.”

Growing up, Massey said his parents listened to Motown and his brother, who was a DJ in the ‘80s, used to sample old Motown records. As a musician, he is drawn to the sounds of the soul and funk records because of their simplicity and storytelling elements.

“It’s the beat, you can’t help but move to it, even if you’re sitting down you are going to be tapping your foot or bopping your head,” he said.

Listen to this excerpt from Take It Higher by Marcellus Wallace. Song courtesy of Ajay Massey.

At music festivals and shows, young and older crowds enjoy his music – its appeal is cross generational, said Massey. Many people think Marcellus Wallace is a cover band, because many of the elements in their songs are similar to the Motown sound.

“We aren’t trying to invent the wheel here, we are just trying to do what we like,” Massey said. “The way it [Motown] makes me feel, I want to make music that makes people feel like that.”