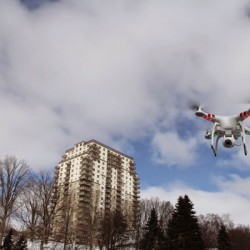 Standing in Harris Park, Jeff Owens opens up a hard-shell black case about the size of a microwave. Wearing a black baseball cap and aviators, the 34-year-old  picks up a remote control that looks like an Xbox controller, but with only two joysticks on it and a holder attached at the top for his phone.

Owens then reaches for the main attraction. It’s completely white, with four arms sticking out of it. Each arm has a propeller  at its end. In the centre is a camera the size of a fist.

This is Owen’s drone—and his new side business. “You can take a video, you can set it up and time it to take videos, you can do a number of things,” he says. “It’s literally a camera up in the sky.”

His drone powers up and lifts off the ground. It sounds like a swarm of bees as it floats above Owen’s head. Then it rises up into the sky and zooms out over a field, with a high-pitched buzz like the sound of race cars zooming around a track.

Canadians can soon expect to see more of these futuristic toys in the skies. The world market for drones is set to double in the next 10 years, according to a report by the Ontario privacy commissioner who is addressing the increased use of these mechanical marvels.

Although Owens has a higher-end model that costs about $1,700, anyone can go to Best Buy and pick up a drone for under $100. But getting one and flying it is the easy part. If you plan on using these gadgets to make some money, the laws around how you can use your drone become a bit complicated.

“Laws are made by people who don’t really know the technicalities,” Owens said. “I think initially there’s going to be a lot of editorializing and a lot of ‘let’s try it this way.’”

Owens, who runs several businesses, says his new drone venture is expanding rapidly, mainly because there aren’t many current regulations for him to follow. The Canadian government is still playing catch-up, trying to figure out exactly what they need to regulate.

Right now, Owens uses his drone to take videos and photos to promote his other businesses. He’s also hired by other companies who want drone footage for their public relations efforts.  Owens said he has used his drone to entertain kids at an athletics camp, for realtors who want to get pictures of a commercial property, and even to shoot a video at Western University’s homecoming football game.

Because drones are so new, there aren’t any classes or training sessions for people like Owens to take. Instead, he went to YouTube, and the first thing he was told to do?

“At first I was like, ‘What are you talking about?’” he said. “[But] if you’re flying a device that could be hundreds of feet above people … you want to see the damage that a drone can cause.”

Canadians can expect to see more drones buzzing around their heads in years to come.

The United States is a bit ahead of Canada in trying to control drones and prevent this kind of damage. On Feb. 15, the Federal Aviation Association (FAA) came out with recommendations to help govern drone users. The FAA rules prohibit flying drones around people, cars or higher than 500 feet. But according to David Canton, a lawyer at Harrison Pensa in London, Ont. who specializes in technology, the rules go a bit too far.

“If you took literally what the FAA was saying and what they were trying to regulate, it meant they could regulate a paper airplane,” Canton said.

The new regulations likely won’t be put into place for over a year, Canton said. As for Transport Canada, the governing body that regulates drones here, the rules right now don’t go much further than banning flying them over crowds or out of eyesight.  Unlike the FAA guidelines, the Canadian rules don’t require people to have a licence to fly a drone. They would only need a special certificate to fly a drone weighing more than 35 kilograms.  But people like Owens, whose drone weighs less than two kilograms, can fly practically wherever they want.

The privacy commissioner suggests many changes need to be made to address privacy and safety concerns. Anyone planning on using a drone should receive training and write a test before being allowed to fly. The commissioner also recommends filing a flight plan in case there are any privacy concerns. This might be a hassle in the near future, but Owens wouldn’t be surprised by the proposed changes. These futuristic toys can help expand your business.
Photo courtesy of Amy Legate-Wolfe

“Back in the day anyone could drive a boat, but now you have to have a licence for a boat. So that system will come as they progress the laws, and I think it’s smart,” Owens said.

Wherever the changes lead us, we should get used to a drone-filled future, Canton said. Laws that control new technology always present a problem for governments. They can’t figure out where the technology is headed since they didn’t think it up, he said. But drone legislation will come as the technology continues to develop and businesses expand their use.

“I think we’ve just barely scratched the surface on what can be done with this kind of technology,” said the London lawyer.

Back in the park, Owens’ phone on the controller sounds a blaring alarm.

“The battery’s getting cold up there,” he says.

Owens decides to show what his gadget can do. The newer models have built-in safety precautions controlled by satellites in case the signal fails. Owens turns his remote control off, sets it on the ground, and walks a few steps back. He crosses his arms and watches as the drone slowly floats down from the sky coming back to the spot where it originally took off. It looks like a mini, futuristic helicopter coming in for a landing. The drone hovers for a few seconds and then lands lightly on the ground.

Owens watches the drone with a big grin on his face, like a proud parent watching his kid nail a jump shot on the basketball court. It’s clear he’s having fun using this gadget to help grow his other businesses. But as for whether this toy will become his main source of income any time soon, well, that’s up in the air.

Images from drones like Owens’ can be shot in HD quality.

Cafés find board games their cup of tea
Heard it through the grapevine: Motown’s back