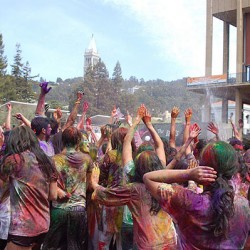 If you’re itching to celebrate spring or the end of winter, the Hindu festival of Holi is for you.

“We are expecting 1,000 to 1,500 people to come out,” said Vinod Varapravan a co-founder of Srshti Seva, a non-profit organization that is putting on the Holi festival in Victoria Park this Saturday.

People from different communities come out to celebrate Holi, said Varapravan. Part of the festival involves participants purchasing bags of colourful powder which they can put on their friends and strangers. Then, after 15-minutes people throw the colour in the air together, he said.

“It’s so much fun, it’s so out there, it’s so ridiculous and everyone gets into it,” said Amol Rao, a Holi enthusiast from Toronto. Rao grew up celebrating Holi along with many other Indian festivals. He won’t be able to celebrate it this year, but he wishes he could.

“Every year I have friends who celebrate Holi. I can call them up and I know that they will be going to a temple to celebrate,” Rao said.

Holi is a two-day festival that began thousands of years ago in India and each state celebrates the festival in its own way. Its origins are in celebrating spring, the triumph of good over evil and the new harvest said Kalpana Jain, a former journalist with The India Times and the education editor at The Conversation online.

There are some variation on the story of Holi, but a popular one states there was a boy named Prahlada and his demonic king father, Hiranyakashyap. The king believed himself to be a god, an idea his son rejected. Prahlada chooses instead to continue worshiping the god Vishnu. Hiranyakashyap’s, sister Holika, said Prahlada should burn because he refuses to accept his father as a god.

Holika said she would sit in a fire with Prahlada, but she had a magical blanket from the god fire to ensure she was protected from the flames. However, the blanket ends up protecting Prahlada and Holika “Holi” burned in the fire.

On the evening before the colour festival, people celebrate the burning of Holika, Jain said. “The people gather in their community and burn what is called a Holika, which is like a bonfire,” she said. The festival is an opportunity for differences to be put aside. “You lose those distinctions of caste and class. Everyone gathers together,” Jain said.

Varapravan echoed Jain’s feelings of the festival. He said using colour on oneself and others brings people together. “Beneath all those colours you realize you’re all the same,” he said.

The positive feelings  that the festival invokes is a reason why Varapravan said he wanted to share the traditions of Holi with his children. He said he has also enjoyed watching the festival impact the wider community. “We have teenagers and youth come back and say they had the time of their life … It’s what keeps us going.”

The cultural comfort that Holi and other Indian festivals is a reason why Rao says he enjoys celebrating the festivals. ” I feel like as you get older those things become more important. They are a source of connection not to just your childhood but your culture. It’s comforting.”