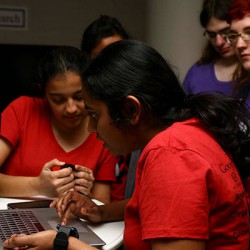 What would you say if you were told you had 36 hours to start and finish a software or hardware project?

This weekend, about 300 people are going to do exactly that, at Hack Western, the first hackathon to take place at Western University.

“We ended up getting a ton of people applying,” said Aishi Jiang, who is responsible for promoting the event. “Way, way, way more than we expected.”

Hackathons have become increasingly popular in Canada and the United States in the last two years, Jiang said. The competition was brought to Western because three of the organizers attended a hackathon at the University of Michigan last year and thought that it would be good for Western to have its own, she said.

“They were sitting there on the University of Michigan campus, they were like, ‘This is such an awesome experience. We just want to bring it to Western,’” she said.

At the beginning of the weekend, you start a software or hardware project and, by the end, it needs to be done, Jiang said. On Sunday, the projects will judged and prizes will be awarded to the winners, she said.

“You’re essentially blocking off an entire weekend to code with friends,” she said. “That’s a pretty awesome experience.”

The enthusiasm isn’t just coming from people who are already active in the technology community at Western, Jiang said. Anyone who wants to learn new skills, such as coding, can participate, she said.

“We’re trying to make it super accessible to anyone,” she said.

With a mix of experience levels and skill sets, hackathons provide an opportunity to meet people you wouldn’t otherwise meet, Jiang said.

“One of the things they do at hackathons is find other people to start working with. So, I’m excited for that.”

Shah also started U of T Hacks, a hackathon for students at the University of Toronto, in September 2013. One of the most important things you need to do is get companies to sponsor your event, she said.

Hack Western has both local and international companies sponsoring its hackathon. One sponsor is Magnet Forensics, a Waterloo-based company that makes law enforcement technology, has a booth, is providing mentors to assist the participants and will award a prize for the project with the greatest social impact, said Jamie Dool, vice president of engineering.

“Really, we’re just hackers and tinkers at heart, so we get pretty excited about these kinds of events,” he said.

More than just being beneficial for the company, hackathons also give students an opportunity to apply the theory they learn in school to solve a problem that has a real-world impact, Dool said.

“That’s beneficial in terms of the growth and applicability in the industry,” he said.

Shah, who has won a couple of hackathons herself, said that participating in these kinds of events is important when meeting possible recruiters.

“It’s always a topic of conversation when I’m talking to recruiters,” she said.

In addition to being an opportunity to appeal to possible employers, one of the winners of U of T Hacks published the app they developed at the hackathon, Shah said.

Hackathons are a breeding place of entrepreneurship, Jiang said.

“Some people might spend a weekend hacking a project together and realize it would actually be super cool to turn it into a business,” she said.

Correction: An earlier version of this article described Magnet Forensics as a London-based company. It is based in Waterloo.