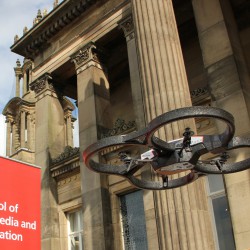 As part of their course in Integrated Storytelling, Master of Media in Journalism and Communication students were asked to present short talks about their findings from the world of innovative journalism.

Out of 18 student presentations, three were selected to present to the entire Faculty of Information and Media Studies.

Denise Chang
Will drones be an essential tool for journalists in the very near future? Only four post-secondary schools in North America have adopted drones into their journalism programs but drone technology continues to be increasingly sought after by newsrooms and journalists alike. In this talk, I explore the potential drones can add to storytelling and considers why 2016 could be a breakout year for drone journalism.

Richard Raycraft
My talk was about the potential automation of journalism. I talked about how some areas of reporting are already being automated, in particular sports and business journalism. I discussed the technology behind it and emphasized that a lot of journalism can be automated because it is routine. This might seem like a bad thing for journalists but integrating intelligent machines with human skills might actually make for better quality journalism.

Emma Clarke
This Teddy Talk examines the emergence of virtual reality in journalism. Several case studies, such as “Project Syria,” “Harvest of Change” and “The Displaced,” are considered in conjunction with the potential ethical dilemmas and accessibility issues posed by such technology.

You can check out the full list of presentations at the Pixelguild site.