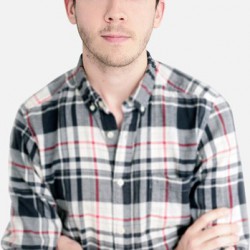 From the sixth story windows, at the corner of 47th and the Avenue of the Americas, Stuart A. Thompson can see a sliver of the bustlingly vista of Midtown Manhattan.

The noise of the city are drowned out by the din of the Wall Street Journal newsroom.

He didn’t know who he’d write for, just that it’d be in New York. The city is universally known for doing the things the rest of the world will be doing soon. So it’s fitting Stu is here.

This is storytelling with a focus on graphics, charts, programming, math and statistics. He said his type of journalism skyrocketed last year.

“It seems to be where it’s going. There seems to be a lot of hope and excitement around that,” he said.

Thompson’s passions are the same as Vox’s Ezra Klein and FiveThirtyEight’s Nate Silver who both launched data-driven news sites in the last year or so. They pivoted away from traditional news agencies to use data and statistics to tell compelling stories with the sheer scale and range of digital information available today.

Right now, he’s part of the team at Wall Street Journal that’s rolling out a total overhaul of it’s website next Tuesday which marks the paper’s first online redesign in seven years and a news app for the Apple Watch next Friday.

Beating the early morning traffic, he takes the subway into Midtown and by the time he reaches his office, his do-to pile at his desk is already full. The things greeting him are  long-term assignments. Throughout the day, the number of things stack up as other editors and reporters will be coming to him with ideas on using graphics and data to help tell their own stories.

Infographics, charts, graphs, timelines, maps – Thompson has to tackle it all.

“It’s easier to break down data, to break it down and you can enrich your storytelling in ways that wouldn’t have been possible decades ago. You needed a lot more formal education but now we have the tools, tricks and community to build that stuff up.”

He has to get a jump on it early on because the groundswell of requests will be coming later in the day. Graphs and data can no longer be an afterthought for reporters here but have become an integral part of their reporting. Visual editors are also embedded in specific sections and the larger projects reach Thompson’s desk too.

On top of all that he also has to constantly be on the look at for new research, statistics, longitudinal studies for story ideas that he will produce interactive graphics for.

The bottom line is that his focus is online-first. Every data story he produces has to play on the website, the mobile app and possibly the print version.

Because Thompson sits right across from the print graphics section, any cool data idea he thinks of can easily be moved to the physical edition.

He punches out at 5pm if there’s no breaking news story and despite living in New York for the past 10 months, he says exploring the city is still one of his pastimes.

“I mean it’s New York right? I’m still getting to know the neighbourhood.”

Thompson’s unique blend of programming and reporting can be traced back in 2007, Thompson enrolled at Western University in media studies and worked at the campus newspaper.

Near the end of undergrad, he dabbled in programming and that’s when he realized that having technical skills is what sets him apart from other journalists.

“Besides reporting I was doing a lot of the web stuff and that’s how I carved a niche for myself. Since people in the Gazette were better reporters than I was. But you try and find a way to stand out.”

He became its editor-in-chief and revamped the entire news section, the website and laid the groundwork for a more online-first focus during his tenure. He used that to catch the eyes of the digital team at the Globe and Mail.

He’d produce data-driven stories there for more than three years and help usher in the massive digital team there. All of which lead him to working in the city that never sleeps.

“We’re hiring more people in this field,” he said. “There’s something in this movement that we haven’t seen previously. A lot of talk about how to modernize newsrooms to handle this type of work.”

Stu is one of the forerunners for data journalism but it definitely seems he’s won’t be alone for long.

View all posts by Jeremiah Rodriguez →
NHL playoffs a busy time: for some more than others
A day in the life of an online newsroom: Jess Brady