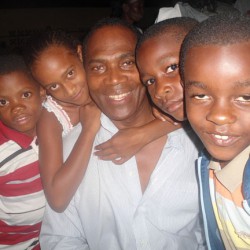 Imagine being a world champion track and field athlete.

Now, imagine putting on the same sweaty T-shirt every day and pulling out splinters from your feet because you have no shoes to run in. Imagine only eating one bowl of rice in the morning and showering with just water and no soap after a full day of intense training.

To us, here in Canada, it’s unimaginable.

But D’Lenney Grant, who created the CHANCES Education Fund, knows this is the reality for most athletes in Jamaica. Grant travels to Jamaica every two months to bring money and goods to his sponsored students and athletes and is planning to head there later in March.

“That T-shirt you were going to throw out,” he said. “They’d get it and think they’d won the lottery.”

The CHANCES – Children Having A New Chance by Education Support – Education Fund was started by Grant in September 2012. Grant’s charity currently sponsors 150 athletes, along with 100 elementary and high school students and 10 university students. CHANCES sponsors these Jamaican children and many others who otherwise may not be able to afford food, clothes or school fees.
Photo courtesy of D’Lenney Grant.

The foundation aims to help youth succeed in education and sport.

Grant, who was born in Jamaica and grew up in Canada, now lives in Brampton, Ont., where he is a former principal and education consultant in school boards in the Greater Toronto Area. When the 2012 school year began, he put his career on hold to begin building his charity full-time.

“I felt the need to continue education but in a different way,” he said. “I felt like I really needed to commit. As Nike says, ‘Just Do It’. ”

“I am really focused on helping these kids, seeing the conditions first-hand,” said Grant. “We go on the ground, we are actually there to see what’s happening and we see what they need.”

Every year, Grant collects more than 25 types of donated items on top of monetary donations. Shoes, shirts and body wash are the three main items he provides to athletes who live in athletic dorms in Jamaica.

“I had old shoes sitting in the bottom of my locker that I was going to throw out because they had holes in the sides,” said Wolynski, a third-year English major. “It makes me feel so good that my shoes are actually going to a good cause. They’re helping someone.”

Grant hopes to have 1,000 shoes donated each year, but so far only 150 pairs have come in. “Most individuals in Canada don’t see it the way I see it,” said Grant. “I’m on the ground, seeing how these kids are living and when I try and tell people back here, they don’t believe me.”

It’s not just the athletes in Jamaica that benefit from CHANCES.

Grant explains that the elementary and high school students he sponsors often can’t afford to pay for transportation to school or a school uniform.

“I just want these kids to have the opportunities to succeed,” he said. “I see kids that haven’t eaten lunch for four months.”

By providing these students with a bus pass or a notepad and pen, Grant knows he is changing lives. “Before I got CHANCES started, I sponsored three kids,” he said. “One of those kids didn’t have enough money for food – he didn’t even have shoes.”

Years later, the student received the award for top student in Jamaica from the governor general there. That same student now lectures at schools around the island.

“I remember when he was starving at school, and now he’s lecturing,” said Grant. “I feel privileged that I was a part of that, and now he can serve and influence so many young people.”

Grant paid about $300 out of his own pocket to cover that student’s school fees, lunch, school uniform, transportation and basic school necessities.

— D’Lenney Grant is currently publishing a book of his poetry that will be released in April 2014.

— All of the poems in the book are written about women’s rights and young girls’ lives in Jamaica.

— One featured poem discusses the reality of many girls selling their bodies in order to afford to go to school.

Food trucks: A tale of two cities
More laughs in London not a Bad Idea