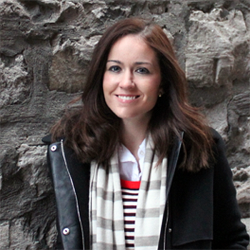 Ottawa is the city of heavy hitters who have big ideas and even bigger egos. For a journalist, it provides countless story ideas, because something is always going on.

Dickson is a reporter at iPolitics, a website dedicated to providing up-to-the-minute news on what is breaking and stirring in Canadian politics.

“I really like reporting on the everyday moving’s that effect the entire country,” Dickson said.

Reporting on Parliament Hill is a change in scenery for the petite Maritimer who comes from a town of roughly 12, 000.

Before I met Dickson, I had no idea there was a town called Truro, which lies about an hour northeast of Halifax. She said growing up she was involved in theater and pursued it as a major at Acadia University.

“Theater was my first passion,” she said.

Despite her flare for the dramatics, Dickson decided to pursue a career in journalism, and after graduating from Western University in 2014, headed to the country’s capital.

After a stint with the Vancouver Observer, she landed a spot with iPolitics.

Jeremy Copeland was a professor of Dickson’s she studied at UWO. He says what stood out about her was her drive and work ethic.

“For young journalists, it’s important to find your own way, and create your own opportunities, and Janice has managed to do that,” Copeland said.

Dickson, from what I observed during my internship at iPolitics, is calm and collected-even if she’s feeling the heat. With a packed schedule of writing stories, and now writing a book, it’s wonder how she keeps going.

“I don’t have that feeling of a work-life balance. I’m living in the moment, and this is exactly what I want to be doing,” she said.

For Dickson, her days start early. She’s up at 7 a.m. checking what she’s missed overnight via Twitter then it’s off to a meeting or in the office to write a story. After work, she takes advantage of the opportunities that Ottawa provides to socialize. She says she uses the opportunity to meet people.

“There are quite a few receptions on the hill or nearby and it’s a great opportunity to network with either industry professionals or members of parliament and their staff.”

It’s at events that provide her with insight into what is happening in Ottawa, which helps generate new story ideas. Dickson said for her, crafting a story starts with the headline which she says helps her organize her story-it’s also what she tweets out to the public.

“With online journalism, it’s important to write leads that grabs the readers attention right away. So I try to write a lead that has the pertinent information and is snappy,” she said.

When structuring her story, Dickson says she likes to try and put a quote close to the top, which she says helps engage the reader. “It helps the reader engage and get into the story quickly they may want to hear more from that person.”

Her methodical approach to writing comes in handy as she says writes two-to-three stories a day.

Dickson, from what I noticed, is constantly on the lookout for the next story to break. “You really have to have your finger on the pulse of the city all the time,” she said.

Her instincts are on par and she is relentless in pursuing a lead. She broke the story of the controversial Liberal nominee Nour El Kadri who was linked to Syrian pro-Assad regimes.

Her news coverage was picked up by other major news organizations like The National Post and the Ottawa Citizen.

When she’s not breaking news on the Hill, Dickson is editing her first book called, “Herbert Peppard: The Eternal Man. It’s a biography on Peppard who during Second World War was a member of the elite joint unit with the United States known as the Devil’s Brigade.

It’s a process that has taken over three years to complete. Dickson, who seems to have an endless desire to write, doesn’t seem phased by how long it’s taken for the book to come together.

“I’m drawn to personal stories and sharing stories is what I love to do,” she said.

For Dickson, telling stories and understanding the movers and shakers of capital city is what makes her tick. “No day is ever the same. I approach each day with a degree of openness and figure things out quickly and so that drives me everyday.”

View all posts by Selina Chignall →
New media brings new readers
The importance of multimedia journalists, according to one