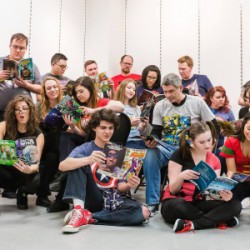 He’s faster than a speeding bullet. He can leap tall buildings in a single bound.

Jesus Christ will be flying into the McManus Theatre April 3-11.

Directors Sam Shoebottom and his wife, Angela Southern, have transformed the classic rock opera but without altering the story of the passion of Christ – the last days leading to his death.

For Superman, there is right and a wrong in the universe and for Shoebottom, the parallel between good and evil is just as prevalent in the Bible as in comic books.

According to Shoebottom, the first writers of comic books would often turn to scripture to find stories.

“Why not take these two separate worlds and have them shake hands,” Shoebottom said. “My wife and I love our faith and we love comics so why not bring the two worlds together?” he said.

For Shoebottom, it’s no different than taking Shakespeare and re-adapting one of his plays into a modern performance.

In the 1973 film version of Jesus Christ Superstar, the story begins with the characters as actors, travelling to the desert. In this production, a cast of comic book fanatics are off to comic-con.

“Each biblical character has a superhero counterpart representing the duality between characters,” Shoebottom said. “They are matched with similar traits. We want people to say, Wow! Superman is like Jesus, Mary Magdalene is like Wonder Woman and Judas is like Batman,” he said.

Jenn Marino plays Judas/Batman. “It’s amazing how similar these two worlds are. You can see the parallels in good and bad as with Judas and Batman. The Dark Knight is conflicted. He wants to save people but he also wants revenge for his parent’s death. He’s human, he’s in our everyday life,” Marino said.

In this version, Judas is performed as a woman and Marino was thrilled to get the part.

“I think Judas as a woman adds more power to the role. It becomes a real triangle of jealousy. Judas and Jesus share a brotherhood that is broken when Mary appears. The tension, hurt and emotion is so much stronger. It really tugs and brings another level to Judas,” Marino said.

“Right now, we’re just cleaning up,” Marino said. “We want this to be unforgettable. The cast’s vocals are amazing. It’s a large cast and we have all different ages and ranges. We pull our characters from the Bible and from the comics. We know our poses,” she said.

Other cast members include, Trevor Richie as Jesus/Superman, Kayla Rock as Mary/Wonder Woman, and Simon Goodwin as Pilot/TwoFace.

For Shoebottom, it’s been easier than expected because of his cast. “They’ve done their research and they are so excited to bring this to the world, it’s something new,” said Shoebottom. “They’re all so committed.”

Shoebottom hopes that this production will open theatre to newcomers,” he said.  “Some might come with more of a religious perspective, others might come because of the comic book angle…we just want the audience to have a great time.”