John McKenna is the Executive Producer, Television News, of the Hamilton based television station, CHCH. McKenna stopped by the MAJ New Media class last week. He started the class discussion by showing television ratings among competing networks in the Toronto – Hamilton marketplace. Most of us were surprised to learn that CHCH typically ranks second, behind CTV, in viewer ratings. However, CHCH is not always in second place, McKenna emphasized the fact that it is a competitive business. He added that the CBC usually falls into fourth place.

McKenna shared one story about a sudden hike in viewership during a competitors 6:00 p.m. news show. He said he noticed that the ratings were increasing during the latter half of the show. He explained that usually ratings decrease in the second half and he was perplexed by the increase. Then he realized that the popular sitcom Modern Family was on next and so Modern Family viewers were tuning in ten minutes before the show.

McKenna was pleased to learn our class is collecting data about city councillors  and will be publishing an interactive, online project gathering information to help
voters in London learn more about the people running in the upcoming municipal election.

The class enjoyed McKenna’s visit and so I thought I would include some of their testaments:

“He seems to have found a balance between running a business and maintaining his integrity. He was realistic about the media landscape yet still managed to be inspiring, which is a nice change after all the forced idealism we’ve been subjected to.”
– Clark Teeple

“John gave us good insight into what it takes to compete for TV viewership. He also gave us some good insight on how to stand out as young journalists entering a challenging market.”
– Chantal Da Silva

“John presented a candid discussion on how to integrate savvy business with journalism. His explanation of CHCH ratings and their success was surprising and informative and definitely something I found to be eye-opening.”
– Sarah Rohoman

“He was cool. He helped me understand how ratings work.”
– David Ingram

The MAJ group expressed their excitement and appreciation for John McKenna’s visit via Twitter, and as you can see, he had a great time with the class: 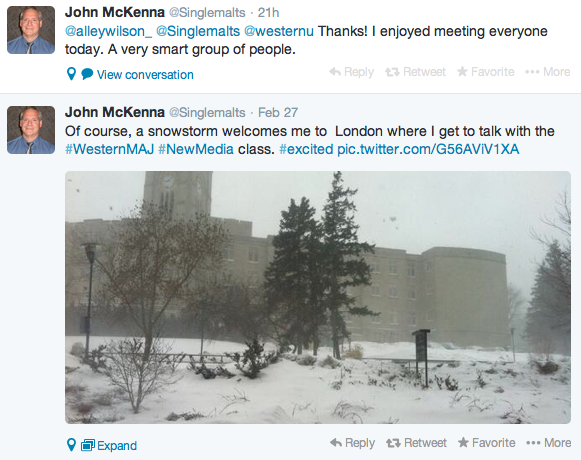 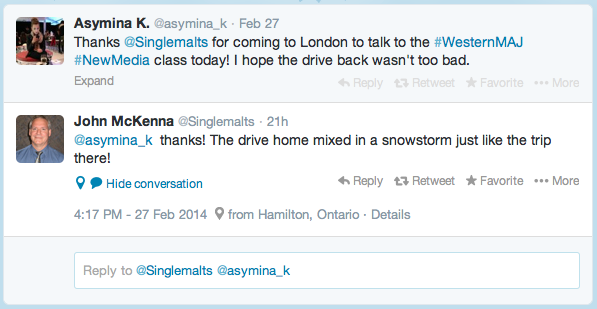 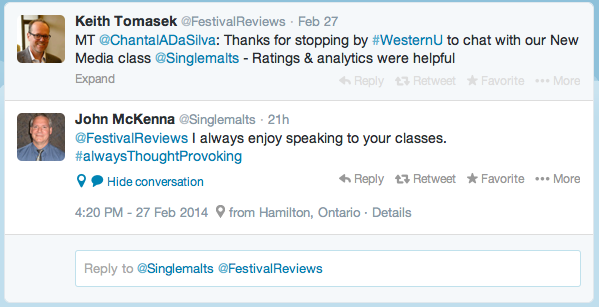 To keep up with our current class project, click here.

A Day in the Life, Arts & Culture, Politics