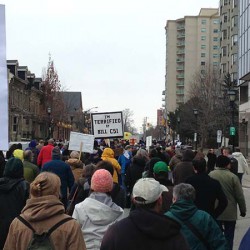 By Sumayya Tobah on April 10, 2015 in Community, Politics

A month after their first protest, the citizens of London Ontario are planning to gather once more to express their anger against the newly proposed Bill C-51. This “Day of Action” is the second in a series of nation-wide protests planned in an attempt to stop the passing of the new bill.

On April 18, a second protest is planned to be held in Victoria Park, and according to activist Emilee Guevera, it won’t be the last. “We need to continue to make our voices heard and show that we, the citizens, are a crucial part in allowing this system to function.”
Guevera was just one of the nearly 200 people who participated in the first protest in March 14. She says the experience was more personal than political.
“Someone handed me the microphone and suddenly I was screaming! I didn’t realize I needed to yell so badly, and it wasn’t until I was up there that I realized just how angry I was. To see that reaction come out of myself and so many others — it was unreal.”
Why all the anger? The new conservative bill would give the government legal and unrestricted surveillance powers. It is intended to be used only for reasons of national security, but what exactly that means has yet to be defined.
“I was really vocal in my stance against fracking, for example, ” says Guevera. “I took a stance against something our government was really pushing for. Will that categorize me as a national security threat? Maybe. And that’s what scares me.”
Supporters, however, continue to say that this bill is a step in the right direction. A protestor holds a sign while standing in Victoria Park on March 14th, 2015.
Photo by Sumayya Tobah.

“I have heard many supporters say ‘this is bill is necessary to keep us safe’,” says Marie Rioux, another activist in the London community.
“My response to that is, ‘do you walk down the streets these days and feel unsafe?’ The answer is always ‘no’.”
Rioux says that while this bill has put many on edge, it has brought the different minority communities in London together.
“The rally we had on the 14th was great because there was representation from all groups; we had indigenous peoples, environmentalists, Muslims, black Canadians. It was really a coming together of sorts. That’s what makes a rally successful, in my opinion.”
“The sooner we start to listen to each other and learn from each other, the sooner we can start to make real progress.”
The success of these nation-wide rallies may even be quantifiable: a Forum Research poll conducted at the end of March showed that with awareness and education on the bill, the support was also steadily dropping.
Some numbers, however, are only going up: the upcoming rally is looking to be just as big, with nearly 300 people “attending” on the Facebook event page.
The success of these rallies can only be determined with time.

Sisters of All Nations
The Death of Coachella?