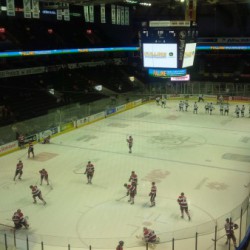 Budweiser Gardens will be draped in green and gold tonight when the London Knights start their 2015 Ontario Hockey League playoff run.

They finished the regular season as the third seed and will host the Kitchener Rangers in a best-of-seven series.

Here’s the three things you need to know about the matchup:

Goaltending will be huge

The Knights rotated goalies this year, with Michael Giugovaz playing in 47 games and rookie Tyler Parsons playing in 33. Neither was stellar but the two combined for a 40-22-4 record.

Taylor Choma, a RogersTV cameraman who has followed the team for several years, says goaltending is the Knights biggest issue right now.

“Neither goalie is very reliable,” Choma said. ” I believe that in the first round it will be the difference between losing in four games and possible pushing it to a seven game series.”

Jim Van Horne, the Knights colour commentator for CJBK, believes the duo isn’t as bad as some think.

“I think overall the goaltending was better than they thought it would be,” he said. “At the start of the year it was like, ‘Who’s going to play goal?'”

Van Horne says all the Knights need is for one of their goalies to play ‘well’, something each had shown in stretches this year.

On the other side, the Rangers will rely a lot more on former World Junior goalie Jake Paterson. He was acquired by the Rangers halfway through this season and he has the ability to steal a series.

” He’s an elite kind of guy,” Van Horne said. “If he becomes invincible then London is going to have a big problem.”

Forward depth not an issue for London, at least not yet

The Knights had three players top 100 points this season: Max Domi, Christian Dvorak and Mitch Marner. After that trio, only Matt Rupert topped a point-per-game, with 75 in 61 games.

But that trio plus Rupert is unmatched by Kitchener, who’s leading scorer had only 62 points. The mismatch of high end talent means London shouldn’t have trouble scoring goals, especially considering how lethal their power play was this season.

Marner led the league with 55 power play points, and Domi was fifth with 45.

The question is whether a lack of forward depth is enough for a deep playoff run.

“I don’t believe the fact that Marner, Domi and Dvoak have all hit 100 points means that they have the ability to win over the other powerhouse teams in the west,” Choma said. “It will take a lot more.”

Van Horne, however, has other thoughts on the ability to overcome Western conference favourites Sault Ste. Marie or Erie.

“With the high end guys that London has – I call it a puncher’s chance, you know Buster Douglas against Mike Tyson,” he said. ” They have the top end talent and if they perform well, they don’t need the depth.”

Young ‘D’ core could be difference

Gone are the days of Olli Maata or Nikita Zadorov patrolling the Knights blueline.

This defensive core has a grand total of just five career playoff games under its belt.

“It will be a big wake up call for the rookies but I’m sure they will adjust quickly,” Choma said.

Likewise, Van Horne points to the inexperience he saw during the season.

“A heavy forecheck seems to be able to create turnovers for the other team ,” he said. “Below the face-off dots they tend to get hemmed in sometimes with the inexperience they have on the blueline.”

But both Choma and Van Horne think the Knights can take the series in six or seven games.

“‘They’ve had one game in almost two weeks so . . . they’ve had a lot of practice time with young guys and a lot of time to scout and do video work.”