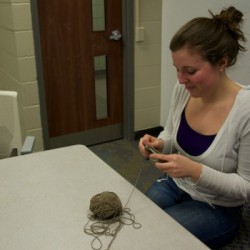 Every Wednesday evening, Jillian Dobbin grabs her bag of yarn and needles and meets up with a group of knitters.

She likes to knit dishcloths, scarves and hats.

Except Dobbin isn’t your traditional grey-haired granny — at 22, she is part of a growing trend of young adult knitters.

“When I first started knitting and talking about it with people, it seemed kind of a weird thing,” said Dobbin, who picked up the craft almost four years ago.

The group she meets with every week is the Knitting Society, a Western University student club.

“There’s a lot of interest,” Dobbin said about the club. “Most of the time, when I mention it to people, they think, ‘Oh, I want to knit.’ ”

Although the group has about 70 members, not all of them come every week. At last week’s meeting, there were fewer than 20 members. Dobbin says more members come to the meetings in the fall term of the school year. Last semester, between 20 and 30 members met every week, she said.

The Knitting Society was founded about six years ago, and it’s been growing ever since. Dobbin became a member during her first year of university even though she didn’t know how to knit.

“It just seemed like a cool, crafty thing to do,” said the fourth-year nursing student. “You feel good about making something yourself without having to buy it.”

Now she knits almost everywhere: while watching TV, doing homework and even on the bus. She finds it is a good way to cope with stress.

“It’s really nice to do during school,” she said. “It’s something you can do without thinking and you still feel productive.” Although Dobbin says her projects are relatively “simple” to make, they are not representative of the group’s knitting skills.

“I’m lazy, and I like things done quickly,” she laughed. “I like making a lot of stuff more than complicated stuff.”

Western’s Knitting Society is not the only place where you can find young adult knitters. Last year, the London District Weavers and Spinners Guild welcomed a couple of young members.

“Many of us are retired,” Beth Whitney, a member of the guild, said about the group’s membership. “But we have been interested in getting younger people involved.”

Laura Keating, 21, is one of guild’s two youngest members. She learned how to knit when she was only 10, but she lost touch with the craft soon after. She got back into knitting when she was about 18.

“I got seriously into it, and it became a huge addiction,” she said.

Keating went to H.B. Beal Secondary School, where she took classes in textiles. In her last year, she won the Canadian Broderers’ Guild bursary award and the London District Weavers and Spinners Guild award. She, too, has seen an increase in the number of young knitters, and all of her friends from high school either knit or want to learn how.

“I’ve had a lot of people asking me to teach them,” she said.

She says she’s especially seen an increase in yarn bombing — wrapping public inanimate objects such as trees and lamp posts in yarn. While in high school, Keating co-founded the Young Underground Collective of Knitters, a group of “guerrilla knitters” that did yarn bombing around London. Other than yarn bombing, Keating likes to knit scarves and wrist warmers. Right now, she’s trying to learn how to knit socks, which she said is hard.

“I’m more focused on the yarn and how the yarn turns out with the knitting pattern than the pattern itself,” she explained.

Keating wants to be a fibre artist, working with experimental textiles and other media involving textiles.

“I have a couple of commissions lined up spinning dog hair,” she said.

As for Dobbin, she doesn’t plan to quit knitting any time soon.

“I couldn’t imagine stopping it.”